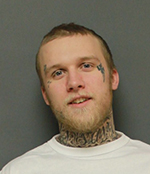 A high-risk predatory offender will move back to Albert Lea on Thursday after being released from prison in Lino Lakes.

Cody Padraic Trott, 26, is slated to move to the intersection of Margaretha Avenue and 11th Street, according to a community notification from the Albert Lea Police Department.

Trott is classified as a Level 3 predatory offender, an offender who is the most likely to reoffend. He has been in and out of prison since he was a juvenile and has had at least two sex-related offenses that landed him in prison.

He has a juvenile history of sexual contact — including inappropriate touching and penetration — with vulnerable juvenile victims, both male and female, ages 12 to 16, according to police.

He took advantage of the victims’ vulnerable states and used force to gain compliance.

He is described as being 5 feet, 8 inches tall and weighing 158 pounds.

With Trott’s release in the community, there will be six Level 3 offenders in Albert Lea.