Funeral services for Pauline G. Iverson will be at 11 a.m. Tuesday at Bonnerup Funeral Service in Albert Lea. The Rev. Russ Scepaniak will officiate. Visitation will be one hour prior to the service. Interment will be in St. Theodore Cemetery. 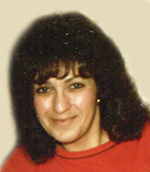 Pauline was born April 3, 1953, in Albert Lea to Paul and Sarah (Villarreal) Diaz.

Pauline grew up in Albert Lea and was raised in the Catholic faith at St. Theodore Catholic Church, where she also attended school.

In January of 1997, Pauline married Michael Iverson in Austin. Pauline had various jobs in Austin and Albert Lea as a caregiver in different group homes to those with special needs. She belonged to the Eagles Auxiliary and enjoyed working there. In her free time, Pauline would drive her Harley Davidson, tend to her flower garden, listen to old time 50s and 60s music and play on her tech gadgets. Most of all, she enjoyed spending time with her family and grandchildren.

Those left to treasure her memory include her husband, Michael Iverson; mother and step-father Sarah and Donald Wirtjes; son, William (Nicole) Weiser and their children, Jadyn and Mason; as well as other relatives and friends.