A longtime Albert Lea community leader said Monday he was disturbed with the Albert Lea School Board’s treatment of his wife during a January closed session.

George Marin, who announced his intention to run for a School Board position in April, directly addressed Chairman Mark Ciota in a public forum at the board’s meeting and said that his wife, School Board member Jill Marin, was traumatized following the Jan. 19 meeting.

George Marin said he sat with Jill Marin at their dinner table in silence following the meeting. He said she could not speak and was having trouble breathing. 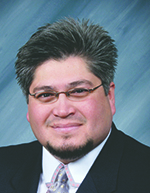 “Mark, my wife trusted you,” George Marin said. “I trusted you. I no longer do.”

George Marin compared his wife’s reaction following the meeting to the look trauma victims give.

He said though he did not know what happened during the closed session, he would have been remiss as a husband and as a community leader if he did not tell the board.

The legality of the closed session for a self-evaluation has been discussed over the last few months.

Chairman Mark Ciota said earlier this year the board’s decision to enter into the closed session was based on legal advice received from its attorney, Kevin Rupp.

George Marin said he heard Ciota apologize profusely for a recording that captured School Board member Linda Laurie and Albert Lea Area Schools secretary Ashley Mattson discussing personal information, but did not hear Ciota apologize or show remorse for how the board treated his wife.

The personal information was reportedly leaked on Facebook as part of Jill Marin’s recording of the April 8 School Board meeting.

Laurie and Mattson were reportedly walking down the hall during a clinic tour when the recording of the meeting captured their conversation.

George Marin said though he has announced his candidacy, he has time to make a final decision on whether he is going to run. Filing season opens Aug. 2.

“I show up at every meeting trying to do the best I can do for the School District,” Ciota said, noting he will continue to try to do what he thinks is best for the district.

Superintendent Mike Funk said personal attacks should be left out of the board room, noting he wants to focus on teaching and learning.

• Did not discuss at length the May 16 closed session that resulted in the non-renewal of head girls’ soccer coach Rick Barnhill. Ciota said doing so would have violated Barnhill’s right to disclosure. He said the board’s decision was not unanimous during the session.

• Established dates for filing affidavits of candidacy. The filing period begins Aug. 2 and closes Aug. 16. An affidavit of candidacy must be filed in the office of the district’s clerk and the $2 filing fee paid prior to 5 p.m. Aug. 16.

• Approved a concert choir trip to Nashville and Memphis, Tennessee, from March 9 to March 14, 2017.