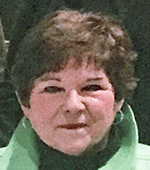 Rita was born March 26, 1941, in Albert Lea. Rita graduated from Albert Lea Senior High School in 1959. She went on to attend St. Marys School of Nursing in Rochester and became a registered nurse. She spent most of her career at the University of Minnesota, eventually being a head nurse of a pediatric unit. She went on to work with Dr. Warren Warwick, who was doing leading edge work with cystic fibrosis patients.

Due to an early retirement because of health issues, she spent her time being a nanny and enjoying her family. Her adopted families are Tim and Dawn Ostrem and their children Karyn, Tommy and Erik; and Parham and Rezvan Alaie and their children Sanauz and Sauviz, all of Eagan.

She is preceded in death by parents, John and Eileen Bergen; sister, Marguerite (Bergen) Donovan; and grand niece Chloe Dickrell.

In lieu of flowers, donations are preferred to the Sisters of St. Francis in Rochester or donor’s choice.

Her loving and generous spirit will be missed by all.