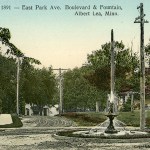 The fountain was pictured in this postcard in 1891. Photo courtesy Freeborn County Historical Society. – Provided 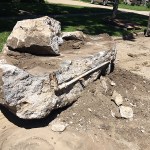 The remains of the fountain were visible during the first part of the construction at the intersection of East and West Park Avenues. – Sarah Stultz/Albert Lea Tribune 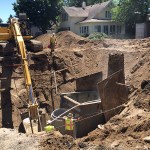 Crews dig down at the intersection of West and East Park Avenues earlier this month. – Sarah Stultz/Albert Lea Tribune

It has been a whole new experience for myself and the other people living in the Park Avenue neighborhood this summer as contractors work to replace our street, water, sewer and sidewalks.

I’d like to think we’re halfway through the project, but we have only just begun.

The major part of the construction began at the end of May and the whole project is expected to last through the summer. Instead of doing my street on East Park Avenue last in the order like what was originally proposed, the city and contractor reversed the order and started there.

I, for one, am glad it started that way as that means our street — hopefully — will be the first to be completed.

Amid the chaos that comes with construction, my neighbors and I have had some excitement about a piece of history that we had heard was buried underneath our road.

We had heard that a fountain that had previously been at the intersection of West and East Park Avenues had been buried under the ground.

According to Hi-Lites and Shadows, an illustrated feature by Irv Sorenson that printed in the Tribune in 1953, this fountain was the pride of the neighborhood.

In 1907, six bronze turtles were purchased for $186 and were placed around the fountain at the intersection. The total cost of the fountain was $350.

In 1920, when the street was going to be paved, it was planned to blast the fountain out of the street intersection, but residents “got an injunction to stop the city,” Sorenson wrote.

“As dynamite could not be used — the city ‘dug out’ under Fountain and dropped it down before injunction was put in effect,” he continued.

My neighbors and I found out about this several months ago and have been eagerly awaiting when crews would start digging at the intersection to see if the story was true and what the fountain would look like. I thought it was bizzare that something like that would be buried.

I don’t know what I had hoped for, but when I came home for lunch one day when contractors were digging at the intersection, my neighbor told me they had found the fountain.

I walked over to where it sat on the road, and to my dismay, it looked like a chunk of beat-up concrete with a pipe sticking out of it.

While it looks like the story was true, it was kind of anti-climatic to see it in that state.

It did not appear that the turtles were found with the remains of the fountain.

I would love to know if anyone knows what might have happened to these turtles. I have heard that there were simliar turtles on other fountains in town, and I’d love to hear more.

It’s neat hearing more about the history of my own neighborhood. I wonder if there are any other mysteries that might be uncovered during this project.