An Albert Lea woman announced last week she will run for Albert Lea School Board.

Angie Hanson, 38, of 2325 Larson Ave., said she wants to improve the school’s climate and ensure students are a priority in decision making.

Hanson — an Albert Lea High School graduate —  is a sixth- through 12th-grade special education teacher at Southland School District in Adams. She said her job and her status as a former student, parent and community member in the district gives her a unique perspective to benefit the district. 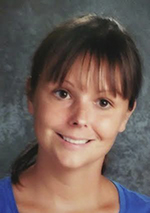 “I am running for school board because I believe I can bring positive change to the school district,” Hanson said. “I believe that everyone deserves to be heard and respected: all district employees, parents, community members and administration.”

She said there are great things that the district is doing for students, such as after school targeted services and summer school programs she called amazing, but claimed the district would benefit from an improved climate and by ensuring that students are a priority in decision making.

She said she will respect and take into consideration administration recommendations, but not agree to proposals she does not think will not benefit students.

“Instead, I will ask questions, research and seek other points of view to determine what is best for students,” she said. “If elected, the students will be my priority. I will continually be asking this question: Does it benefit the students?”

Hanson has a son, Clayton Bibus, a fourth-grade student at Halverson Elementary School.