Stories bind together both past and present Freeborn residents 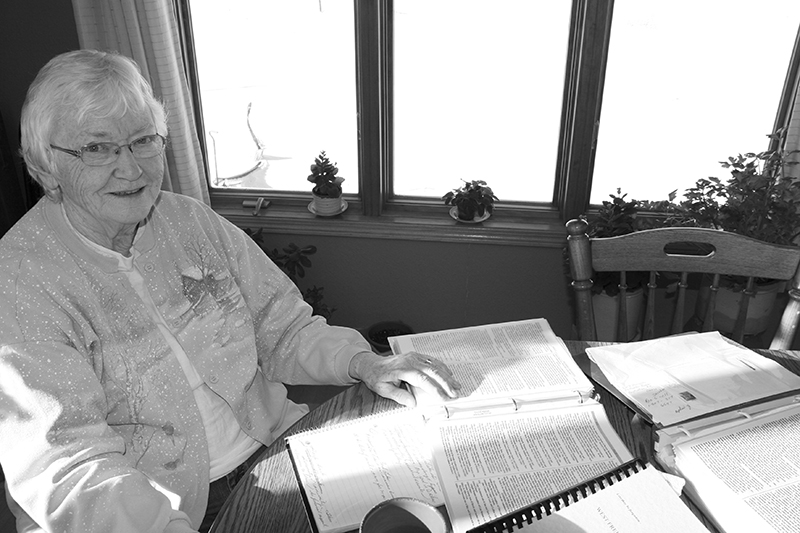 Bonnie Schuster is full of energy and ideas, also quick to smile and offer a cup of coffee. She started publishing the Freeborn Frisbee 18 years ago. “When it ceases to be fun, then I’m going to quit,” she said. - Cathy Hay/for the Albert Lea Tribune

Passionate about her community, history and storytelling, Schuster started the Frisbee in 1998 and recently mailed her 72nd edition. Her subscriber list numbers almost 600 addresses near and far.

She decided to start the Frisbee because the town of 295 sits in between four newspapers, none of which covers all of Freeborn’s news. With her four children grown, she had the time and interest.

“I wanted to give back to the community, and I’m too old to be on the fire and rescue,” she said with a grin.

Newspapers ewin her blood, having worked on both her high school and college newspapers and serving as the student newspaper adviser when teaching in Albert Lea.

“There’s just something about finding that story and wanting to share it,” Schuster said. “It just makes your fingers tingle.”

Her fingers were tingling recently with the contentious issue of replacing the dam on Freeborn Lake. The current dam is fractured and leaking, so something needs to be done.

One could also say the Frisbee holds the community together — whether residents are still in Freeborn or have moved away  with common experiences, history and interests all preserved in the newspaper pages.

Looked back at the winter of 1936 when snow-blocked roads led to stranded students being taken in by townspeople and a school bus driver, accompanied by several Freeborn men, wading two miles through snow back to town after having to abandon the bus

Schuster, originally from Milroy in western Minnesota, came to Albert Lea after graduating from Mankato State University to teach business and history at Central Junior High. She met Lowell Schuster and they married 50 years ago, settling down to farm right outside Freeborn.

“Farming holds you to the land,” she said.

Though retired from farming, she and her husband still live among the farm fields southwest of Freeborn.

Reflecting the ag base of Freeborn and her family, the Frisbee is published four times a year around the farming schedule: Feb. 1 before planting preparation, May 1 after corn is planted, Aug. 1 before harvest and Nov. 1 after harvest.

The Frisbee is a hobby, though a serious one, for Schuster. To subscribe, people simply provide a name, address and donation to help cover postage and other costs. Farmers State Bank pays for the printing, which is done at Arrow Printing. The bank was originally Freeborn State Bank, where an employee and Schuster tried photocopying that first edition 18 years ago. They quickly discovered that professional printing was preferred.

“They’ve supported me all the way on this,” Schuster said of the bank.

She also depends on volunteers like Gail Savick, who helps with birth and death announcements, and the late Tracy Christensen, who contributed her collection of history in books, articles and family knowledge before her death in 2014. Linda Evenson, librarian at the Freeborn County Historical Society museum, is a great resource for many stories.

“I’m not a blue blood so I need to be accurate, and that means research,” Schuster said, meaning she was not born and raised in Freeborn.

As she pores through the archives at the museum, she’s always looking for byproducts — bits and pieces that will later make a story.

That’s how the “West Freeborn Lutheran Church Deaths and/or Cemetery Burials, compilation from 1860-2015,” and “Freeborn Cemetery, 1858-2010,” books came to be, with another one almost done. The books, which are resources for people studying genealogy, are available at the museum library.

In her own words, Schuster is not a “techie,” though she uses a computer to write and layout the newspaper.

“When the computer doesn’t do what I think it should, then the kids have to help me,” she said.

She has stopped worrying about sentence structure, verb tense and typos. The readers don’t seem to mind and they’re getting the message, Schuster said. She also applies the golden rule to reporting, not publishing anything she wouldn’t want printed about herself.

“My goal is to share the private and public events, and the community history,” she said. “I’m grateful for the generosity of the community — their stories and their financial support.”