The leader of Albert Lea’s Beyond the Yellow Ribbon Committee will be the grand marshal at this year’s Third of July Parade, according to the Albert Lea-Freeborn County Chamber of Commerce.

The chamber this week announced John Severtson will be recognized in the parade for his service and commitment to the community and its military families, according to a press release.

Severtson grew up in Albert Lea and graduated high school in 1967. After high school, he joined the Marine Corps and spent 13 months in Vietnam during the Vietnam War. 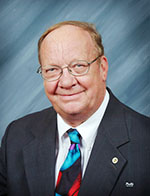 He has served as commander of the local Veterans of Foreign Wars post and is immediate past commander of Leo Carey American Legion Post 56 in Albert Lea.

“In addition to his past service to the entire community, John was extremely instrumental in Albert Lea achieving the Beyond the Yellow Ribbon Community status in 2011,” said Randy Kehr, executive director of the chamber. “His commitment didn’t end there, however. He continues to support service members and veterans through his confined leadership to both the Beyond the Yellow Ribbon Committee and the American Legion.”

The Beyond the Yellow Ribbon Committee has created a network of agencies, organizations, resources and employers to support service members and military families.

The committee will host the annual Freedom Festival from 4 to 10 p.m. on July 3 in New Denmark Park in honor of military families.

The parade will begin at 6 p.m. at the Freeborn County Fairgrounds and will travel down Bridge Avenue to Fountain Street and end at St. Mary Avenue.