According to Minnesota DNR, mallard population is on the rise 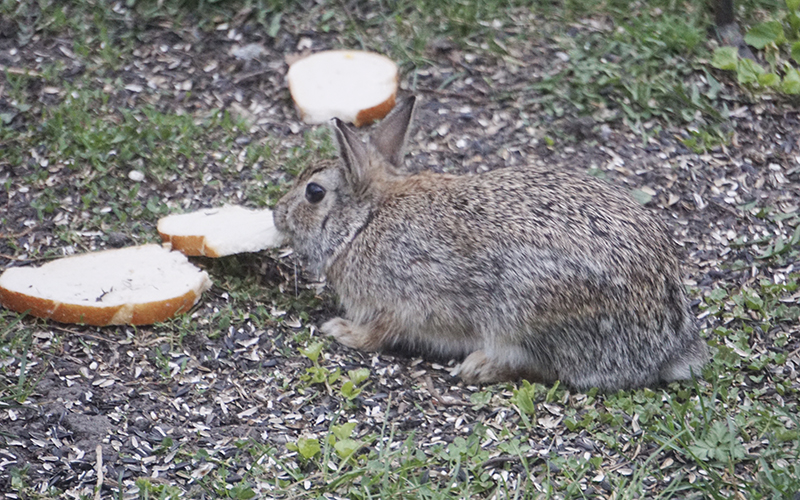 A rabbit does not live by bread alone. - Al Batt/Albert Lea Tribune

“Everything is nearly copacetic. I was looking at Ma’s photo album yesterday. Those old photos bring memories with them. Remember when we were being confirmed? Pastor Larson asked each of us to list the 10 Commandments in any order and you wrote down ‘Three, nine, six, four, seven, two, five, one, 10 and eight.”

“Thanks for reminding me,” I say. As St. Thomas Aquinas said, ‘There is nothing on this earth to be prized more than true friendship.’”

“You’re welcome. I stopped at the Eat Around It Cafe. I ordered a steak. I like my steak rare, but theirs are too rare. The last steak ate my corn. A veterinarian could have saved that bovine. So I ordered it well done. It came with horns and hooves. I asked the waitress if she hadn’t heard me say ‘well done.’ She thanked me and said she hardly ever got compliments. I was sitting at the table of infinite knowledge there when a guy comes over and says, ‘I’ve seen you before. Didn’t I meet you in Philadelphia?’ I told him that I’d never been to Philadelphia.”

“The man said, ‘Neither have I. It must have been two other guys.’”

As I drove along, there was another constant besides car and rural road. Wild parsnip growing in the ditch. It has been my lifetime companion. Resembling a large dill plant and growing up to 5 feet tall, wild parsnip is in the carrot family and was introduced to this country in the 1800s. The plant has a flat-topped, five-petaled yellow flower cluster that is 2 to 6 inches wide and blooms from June to late summer. Wild parsnip is a biennial, producing a rosette of leaves the first year and a single flower stalk the second. It grows in sunny conditions in dry to mesic areas. Wild parsnip is prolific and invasive. The sap from the wild parsnip can cause painful phytophotodermatitis on skin exposed to sunlight. Unexpected red patches and blisters on skin following a walk in the woods or fields are often blamed on poison ivy, stinging nettles, insects or spiders. They could be the result of bumping into wild parsnip. We baled wild hay to supplement the alfalfa we fed the cows. Wild parsnip grew in the prairie we called wild hay. The cows ate the forbs and grasses in the hay, but refused to eat the wild parsnip.

Rocky and Bullwinkle and the rabbits

I loved watching the animated TV series titled, “The Rocky and Bullwinkle Show.” It featured the adventures of a flying squirrel and a moose from Frostbite Falls, Minnesota.

Bullwinkle, a moose dressed as a magician, would say, “Hey, Rocky! Watch me pull a rabbit out of my hat.”

Bullwinkle tore off his shirtsleeve and declared, “Nothing up my sleeve. Presto!”

Then Bullwinkle reached into a hat and pulled out a lion.

The bit ended with Bullwinkle saying, “No doubt about it, I gotta get another hat.”

Bullwinkle must have left his hat full of rabbits in my yard. Eastern cottontails are everywhere. As I walked to the mailbox, three of them hopped ahead of me. As a boy, I was told that cottontail populations run in 10-year cycles with high numbers occurring at 10-year intervals. The population built to a high before disease, weather, predators and poor reproduction reduced it. A low might continue for several years before the numbers move toward another high. Within this 10-year cycle, local areas may have highs and lows opposite the overall state cycle. Some areas may hold a high or low for years and not cycle. That must be my yard. I’m not sure if a 10-year cycle holds true. Populations are impacted by weather and the availability of food. Each year about 80 percent of Minnesota’s cottontail population dies from weather, predators or disease.

According to the results of the annual Minnesota DNR spring waterfowl surveys, this year’s mallard breeding population was estimated at 243,000, which is 18 percent above last year’s estimate of 206,000 breeding mallards and seven percent above the long-term average since 1968. The blue-winged teal population is 317,000 this year, 88 percent above last year’s estimate and 50 percent above the long-term average. The combined populations of other ducks such as ring-necked ducks, wood ducks, gadwalls, northern shovelers, canvasbacks and redheads is 208,000, which is 39 percent higher than last year and 17 percent above the long-term average. The estimated number of wetlands is 221,000, unchanged from last year, and 13 percent below the long-term average. Wetland numbers vary with annual precipitation. The survey estimates the number of nesting ducks and geese and not those that migrate through. The survey covers 40 percent of Minnesota and includes much of the best breeding habitat. A DNR waterfowl biologist and pilot count waterfowl and wetlands along established survey routes by aerial surveys. The survey begins in early May to coincide with the peak nesting activity of mallards. This year’s Canada goose population was estimated at 202,000 geese, lower than last year’s estimate of 250,000 geese. An additional 17,500 breeding Canada geese are in the Twin Cities area. The number of breeding Canada geese in the state is estimated via a helicopter survey in April. The survey includes most of the state except for the Twin Cities and counts Canada geese on randomly selected plots located in prairie, transition and forested areas.

“When you see a man on top of a mountain, just remember he didn’t fall there.” — Paul H. Dunn

“As for me, all I know is that I know nothing.” — Socrates