A memorial service for Ardus Sanderson will be at 10:30 a.m. Friday at Redeemer Lutheran Church in Alden. The Rev. Greg Ofsdahl will officiate. Visitation will be from 5 to 7 p.m. Thursday at Bonnerup Funeral Service in Albert Lea and again one hour prior to the service at the church. Interment will take place in Alden Cemetery. 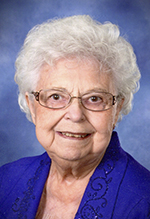 Ardus L. (Fischer) was born on March 2, 1932, to Frank and Mildred (Guenther) Fischer in Freeborn County. She attended and graduated from Alden High School. Ardus was an assistant cashier at First National Bank in Alden, as well as a desk clerk at Kahler Hotel and Days Inn Hotel in Albert Lea for over 20 years.

On March 25, 1951, Ardus was united in marriage to Tenford “Sandy” Sanderson in Walters. To this union, four children were born. Ardus and Sandy enjoyed doing many things together until Sandy passed way in 2007.

Ardus was a member of Redeemer Lutheran Church in Alden. She helped the church by being a Sunday school teacher, choir director, on the church council and was a part of the Homemakers Group. Ardus was also the former president of the County Extension Group. Ardus loved to play cards. She enjoyed the game 500. She enjoyed it so much she immersed herself in four different card clubs. Aside from cards, Ardus took interest in genealogy. In her free time she liked to sew for people, make hardanger embroidery and she also liked to go camping and travel. Most of all, Ardus loved spending time with family and friends.