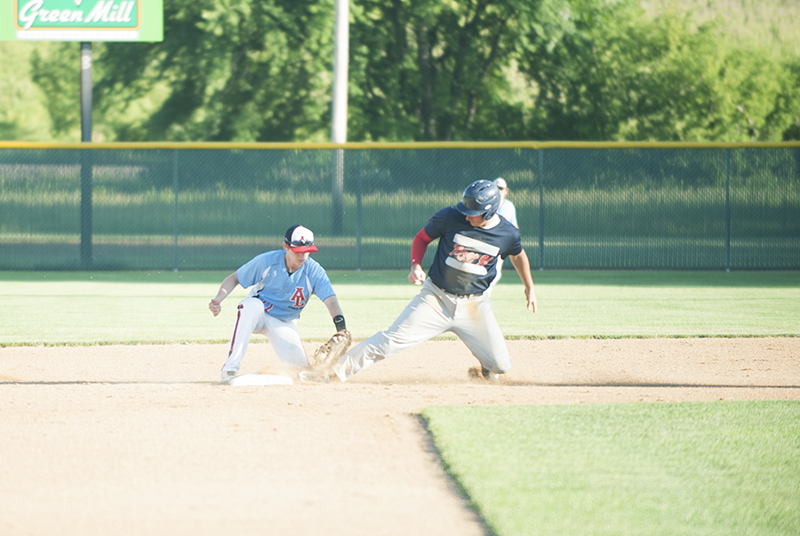 Albert Lea’s Jake Thompson applies the tag on Austin’s Nikolas Gasner during a stolen base attempt in the first inning of Saturday’s game at Hayek Field. Gasner was safe on the play. Jarrod Peterson/Albert Lea Tribune

Albert Lea Post 56 has not had much trouble getting their offense going during the legion baseball season.

However, Saturday night was a completely different story.

Austin Post 91’s Jacob Reinartz  had the Albert Lea bats baffled all night, as he led Austin to a 7-0 victory at Hayek Field.

Albert Lea’s Jacob Bordewick excelled in coming on in relief during the high school season, but on Saturday, he got the start.

After a scoreless first inning, he got himself into some trouble in the second inning, thanks to a couple of walks and soft singles.

He allowed two runs in the inning, but was able to escape a bases loaded jam.

He recovered in the third inning and faced just five batters after an error and walk started the inning. 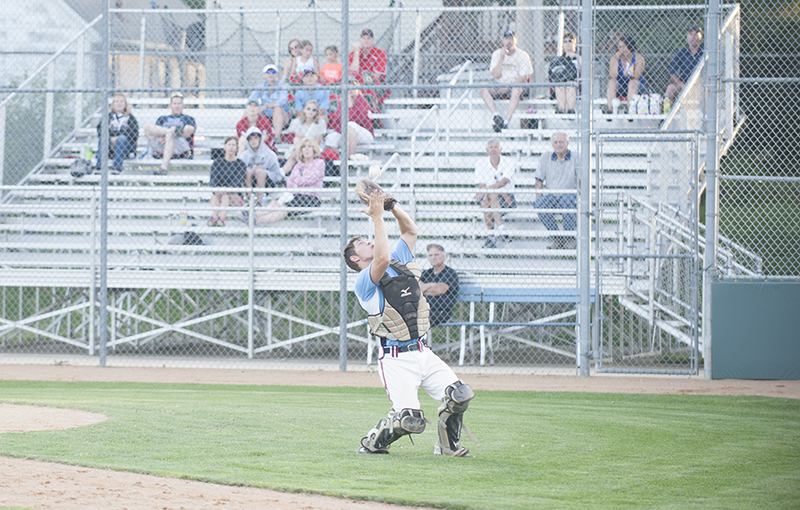 Albert Lea catcher Sam Moyer shows some concentration on a pop-up behind the plate in foul territory during Saturday’s game against Austin Post 91.

Meanwhile, Reinartz got little resistance from Albert Lea. He struck out nine batters through the first five innings.

Post 56 got a small rally started in the third inning with back-to-back one-out singles by Tanner Bellrichard and Mason Hammer.

It was short-lived, though. Reinartz got Jake Thompson to pop out and Sam Moyer to strikeout to end the inning.

That was the only real threat he would face all game.

Cody Ball came in to relieve Bordewick in the sixth inning, and he allowed back-to-back RBI singles before getting a groundball to end the inning.

Austin would add two more runs in the seventh inning to make up the final margin.

After Sunday’s rematch between the two teams was cancelled, Albert Lea will travel to Austin tonight.