Memorial services for Bette J. Henrichs of Albert Lea will be at 2 p.m. Sunday at First Lutheran Church in Albert Lea. The Rev. Diane Odermann will officiate. Friends may visit with family one hour before the service at the church. Interment will be in Graceland Cemetery. Bonnerup

Funeral Service is assisting the family. 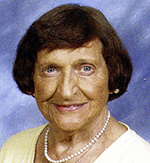 Bette was born June 12, 1925, in Albert Lea, the daughter of Wallace and Jeanette (Hopperstad) Drommerhausen. She graduated from Albert Lea High School in 1943 and the Swedish Hospital School of Nursing — University of Minnesota —in 1946. Bette served in the Cadet Nurse Corp during World War II. She returned to Albert Lea and began her nursing career as a private duty nurse at Naeve Hospital. She was united in marriage to Hemme (Bud) Henrichs on Feb. 22, 1948, and they were blessed with one son, Wade. She continued her more than 39 year career and moved into industrial nursing, first at Queen Stoves from 1951 to 1956 and then at Wilson & Farmsteads & Do from 1960 until her retirement in 1985.

Bette was baptized, confirmed and a lifetime member of First Lutheran Church. She volunteered for the American Red Cross and American Cancer Society. She was a bowler, golfer and an avid card player — especially enjoying bridge and poker.

Bette was preceded in death by her parents and her husband, Bud.

Bette will be fondly remembered as one who made life fun and always had the ability to put a smile on your face.