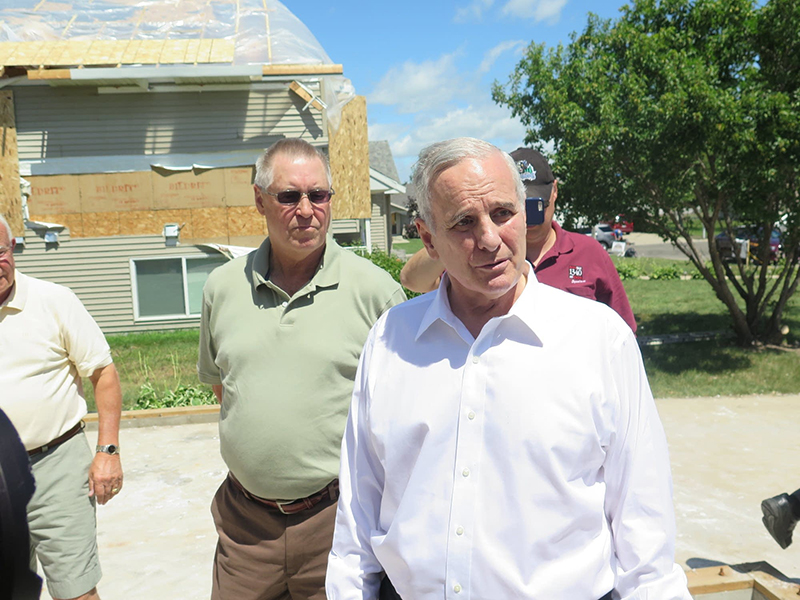 Gov. Mark Dayton got a firsthand look Wednesday at the damage caused by tornadoes that ripped through Watkins, Litchfield and other west-central towns on Monday.

He said the total damage costs probably would not be high enough to trigger federal disaster aid. But he was certain that some state emergency assistance will be available.

Dayton met with local officials in both cities and toured some of the neighborhoods hardest hit by the storms. Many homes and some businesses were damaged and many trees were downed.

In Litchfield, the governor visited with Scott and Amanda Marquardt. They stood on the concrete slab where the couple’s attached garage used to be. The rest of the house was still there, although it’s badly damaged.

“There’s a lot of cleanup and there’s a lot of stuff to rebuild,” said Scott Marquardt. “But it can be rebuilt, and I’ve still got my wife and kids and neighbors and friends and family, so, that’s all that matters.”

Most of the debris in and around Marquardt’s neighborhood was already cleaned up and removed. Dayton told Marquardt that he was impressed by Litchfield’s rapid response.

“This is the best spirit of Minnesota evident right here,” the governor said. “I’m just glad you’re all safe, and your kids. That is the right priority. But it’s still a god-awful thing to go through, and I’m sorry.”

In Watkins, the damage was more extensive.

“We’re moving a lot of trees and a lot of brush and a lot of debris,” Miller said. “The city came together wonderfully to get things moving. It’s been unbelievable the support that area fire departments, area communities have done to help Watkins move on from this.”

Tootz Tschumperlin, a Watkins City Council member, said she huddled in her basement during the storm. When came back upstairs, her house was gone. But she’s ready to rebuild.

“I got my builder hired already. So I’m ready to go,” she said. “I want that baby up. I’m staying with my daughter on the farm now, so it’s not like I’m homeless.”

State and local emergency management officials are still adding up the damage in Watkins and Litchfield. Those tallies will determine what kind of government assistance might be available to help in the cleanup and recovery.

Dayton said he expects the cost to easily surpass the $41,000 threshold that triggers state disaster aid. He said the recently-created state fund currently has a $19 million balance.

“The state pays for 75 percent of the cost. That’s why we have people from emergency services already here and have been here,” Dayton said. “They’re hands-on to respond and provide the assistance and support possible.”

Before that fund was established, lawmakers often needed to return to St. Paul to pass disaster aid in special sessions. That won’t be needed in this case.

But Dayton was still talking about the prospects for the special session he wants to act on unresolved tax and spending issues from the 2016 regular session. A meeting will likely be scheduled for Friday to resume negotiations with House and Senate leaders.