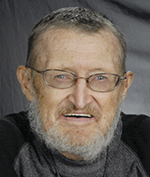 He was born June 2, 1942, in Owatonna, the son of Henry and Marion (Awes) Haberman. Donald attended country school and then Dodge Center High School. He made his living as a farmer and truck driver. On Feb. 22, 1962, Donald and Charlotte Laite were married at Community Lutheran Church in Geneva. The couple raised five daughters. In the early years of their marriage, Don farmed and then had various trucking jobs. In later years, he had paper routes, delivering the Rochester Post Bulletin and Albert Lea Tribune. His grandchildren loved going along with grandpa to deliver papers. Don loved to hunt and fish and he enjoyed seeing the country on his job as a trucker.  His favorite pastimes included Sunday family dinners, square dancing and playing cards. Don loved giving his family rides with his miniature horses — especially his grandchildren and great-grandchildren.  In 2014, Don moved to Blooming Prairie.

Memorial services will be at 1 p.m. Monday at Community Lutheran Church in Geneva. The Rev. Kristin Venne will officiate. Visitation will be from 3 to 6 p.m. Sunday at Worlein Blooming Prairie Funeral Home, and will continue one hour prior to services at the church. Interment will be in Danish Lutheran Cemetery in Summit Township, Freeborn County. Memorials in Don’s memory are preferred in lieu of flowers. Condolences may be expressed to the family online at www.worlein.com.