John J. Remmel Jr., 82, passed away peacefully after a short battle with cancer while surrounded by family on Monday, June 13, 2016.

He was born Nov. 18, 1933, in Austin to Florence (Scripture) and John Remmel Sr. He graduated from Albert Lea High School and enlisted in the United States Army, where he served for two years. 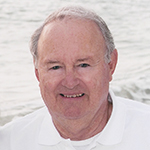 He married Sharlene Whalen on Dec. 26, 1959. They lived in Oakdale and raised three children, Patrece of Naples, Florida; Kathleen of Naples; and Thomas of Rosemount. John was a loving grandfather to Grant, Emily, Josephine and Grace.

He was an avid fisherman and Minnesota sports fan. John and Sharlene retired to Florida in 1998. All who knew him will miss him.

In lieu of flowers, donations can be made to Avow Hospice.