Memorial services for Judith Ann Klukow of Albert Lea will be at 2 p.m. Sunday at Bonnerup Funeral Service in Albert Lea. The Rev. Kent Otterman will officiate. Visitation will be from 4 to 7 p.m. Saturday and one hour prior to the service. Interment will be in the Bear Lake Cemetery in rural Albert Lea. 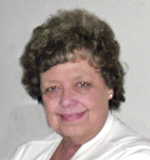 Judy was born Sept. 21, 1941, in Albert Lea, the daughter of Morin and Edna (Wood) Martinson. She graduated from Alden High School and on Nov. 24, 1962, was united in marriage to Ernest Klukow at Salem Lutheran Church in Albert Lea.

Judy had been employed as a waitress at Skyline Supper Club, the Stables Supper Club and most recently as a clerk at Hy-Vee Liquor Store. She was an active member of the Eagles Auxiliary and the Elks Does Auxiliary. In her free time, she enjoyed road trips to visit family and loved to cook and bake. She made the best brownies ever.

She was preceded in death by her parents; brother, Perry “Mike” Martinson; and in-laws Lloyd and Martha Klukow.

Memorials will be donated to the Eagles Cancer Telethon in support of cancer research.