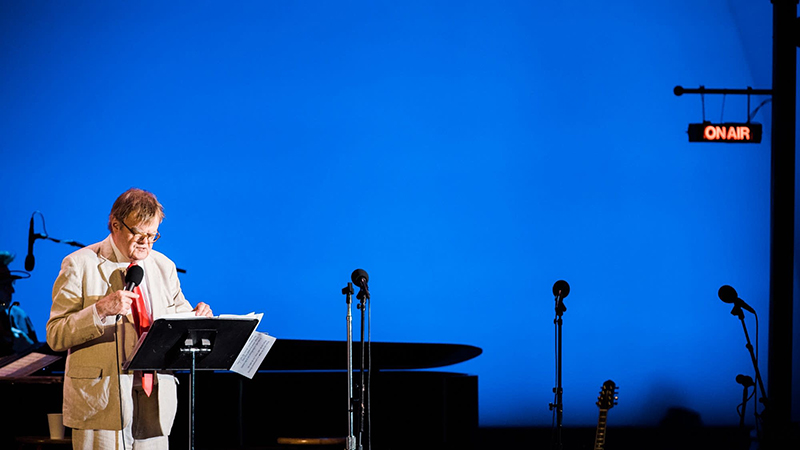 Garrison Keillor delivers the news from Lake Wobegon one last time during his final show as host of “A Prairie Home Companion” Friday on stage at the Hollywood Bowl. - Nate Ryan/MPR News

An ocean of people swept in to the Hollywood Bowl and sat down with Garrison Keillor for his final show as host of “A Prairie Home Companion.”

More than four decades ago, Keillor’s first “Prairie Home” went live at St. Paul’s Macalester College before little more than a dozen people. Friday night in Los Angeles, nearly 18,000 joined him as he delivered the news from Lake Wobegon one last time.

Before the show, people swapped stories about how they’d first discovered the live weekly broadcast. There were people who had listened from the beginning, and there were children so young, they are in what Keillor admits is a kind of parental indoctrination.

There was the woman from Indiana who spoke of huddling around her radio on Saturdays after moving to California just to get a dose of the Midwest she missed. There was the Canadian who began listening from across the border, then stayed hooked for years after he moved to the U.S. He knew he had to come to this show to make sure he saw it at least once.

And there was the young couple speaking Japanese in the food line. No, they weren’t fans. He was there for a college class assignment to write about a show. He picked the final “Prairie Home” at random.

And while the audience was made up of people of all ages, colors, shapes and sizes, by the end of the event it had become a single entity under Keillor’s spell. From the start of the pre-show warm-up, he poked fun at himself and at the idea of retiring. Just after the “Tishomingo Blues,” the song about hearing an old piano that has opened every “Prairie Home” for years, Keillor declared, “This is my big show,” and set out to enjoy himself.

It was an evening of singing and laughter as he harmonized with the five women he described as his favorite singing partners: Sara Watkins, Christine DiGiallonardo, Sarah Jarosz, Heather Masse and Aoife O’Donovan. They sang their old favorites, and many songs with lyrics Keillor had rewritten for the occasion.

But there were serious elements, too. The skits and music delicately danced along themes of aging and mortality, and the pain of lost love. There were references to many of the great performers and regular guests on the show over the years. It became a review of “Prairie Home” history.

And the audience lapped it up.

They howled with laughter at one last tale of the Lives of the Cowboys: Lefty recalled an unsuccessful radio show he once hosted. And they listened intently to the news from the town that time forgot: Lake Wobegon.

Keillor talked about why he created the show — and why he wants to set its weekly creative obligation aside. Now, he’ll be able to focus on other writing projects, including a memoir about his parents, a Lake Wobegon film script and his column in The Washington Post.

The show ended, and Keillor returned to the stage for an encore, leading the crowd in an a capella singing of hymns, spirituals and folk songs.

“When you see 18,000 people sitting and singing quietly with Garrison, you understand who he is and what he lives for, and why they love him,” Kling said. “And it’s one of the most amazing experiences you will ever have in your life.” He doesn’t entirely believe audiences will let Keillor leave, he added.

The young performers in this final Keillor show, longtime “Prairie Home” music director Rich Dworsky said, represent the talent that will continue to propel the show under new host Chris Thile, who takes over in the fall.

Dworsky called Friday’s finale a beautiful show. “Very sentimental, so many memories flowing through all at once, but Garrison is looking ahead, he’s not looking back, and it’s just been a blessing to be part of this show,” he said.

As the crowd finally headed for the exits, Keillor made good on his promise to shake hands and to listen. People in his final “Prairie Home” audience wanted to tell him about what the show has meant for them over the years. Very quickly he was surrounded by a crowd, six and 10 people deep, snapping pictures, and waiting their turns.

He stood quietly in the middle and let it this ocean of people flow over him.