An Albert Lea man is facing prison time after being charged with second-degree criminal sexual conduct. 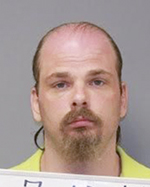 Lee Vincent Wells, 35, was charged and had his first appearance on the charge Tuesday in Freeborn County District Court.

Wells allegedly engaged in sexual contact with a 4-year-old on Sunday in Albert Lea.

He was arrested Sunday after Albert Lea Police Department was dispatched to an address on the report of a sexual assault involving a 4-year-old alleged victim.

Court documents state that upon officers arriving, Wells said “I am a bad person. I did it.”

Wells was then arrested and transported to Freeborn County Law Enforcement Center.

Court documents state that Wells told an Albert Lea Police Department detective several times that “he had done a bad thing and deserved to be punished.”

Wells was reportedly known to the alleged victim.

Wells’ next appearance is scheduled for July 21.

Second-degree criminal sexual conduct carries a maximum sentence of 25 years in prison and a $35,000 fine.