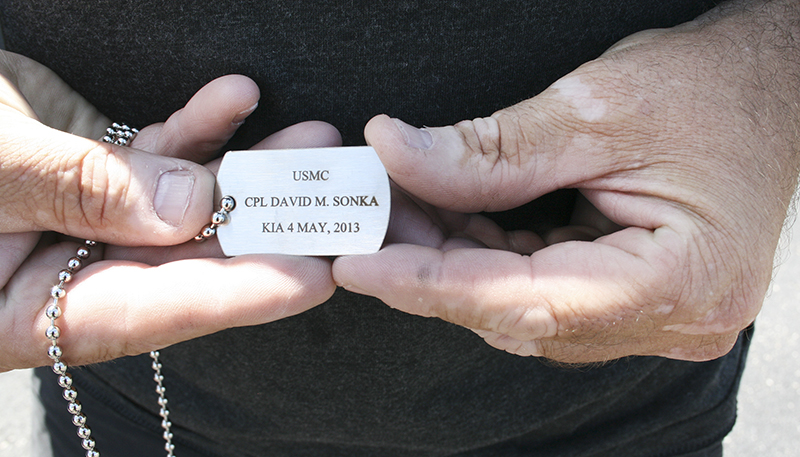 One man with local ties is doing what he can to remember soldiers who lost their lives in the line of duty, as well as the canines who were by their side.

Kevin Sonka started Rocky Mountain Dawgs Project — a division of Dawgs Project — in Colorado, where he lived in 2013 following the death of his son, Corporal David Michael Sonka. David Sonka was a U.S. Marine who was killed during his second tour in Afghanistan alongside his dog, Flex, in 2013.

David Sonka was a lover of animals and owned three dogs of his own, according to his father. His love for dogs spread to his career when he worked as a dog handler during part of his time as a Marine.

Rocky Mountain Dawgs Project made an appearance during the Albert Lea Third of July Parade this year with a new trailer. Elaine Sonka, an Albert Lea resident and Kevin Sonka’s mother, noted that many family members traveled to Albert Lea for the parade and that it has become a family reunion of sorts. During the remainder of Kevin Sonka’s visit to Albert Lea, the trailer made a home in the parking lot of St. Theodore’s Catholic School. 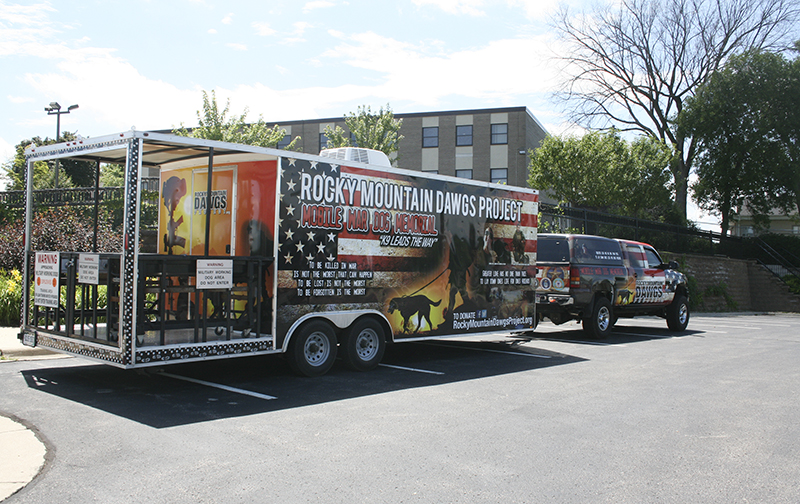 The Rocky Mountain Dawgs Project trailer sits in the parking lot of St. Theodore’s Catholic School, where it did during Kevin Sonka’s visit to Albert Lea during the Fourth of July weekend. – Emily Wangen/Albert Lea Tribune

Inside the trailer are photos and pencil drawings of fallen soldiers and their canine companions hanging on the walls, as well as mementos from groups of soldiers — including signs, dog training equipment and patches. The trailer also includes a dog kennel used in Afghanistan and a table to represent the soldiers and military dogs who are there in spirit, according to Kevin Sonka.

During the parade, unique dog tags were handed out. Each dog tag had the name of a fallen soldier, and the tags were donated by Lou Rich in Albert Lea.

When Kevin Sonka gives out dog tags to children, he noted he explains the significance of the tags and gives them a little information about them. Then he gives them one requirement — they must do research on the soldier whose name is on the tag and share their findings with their class. 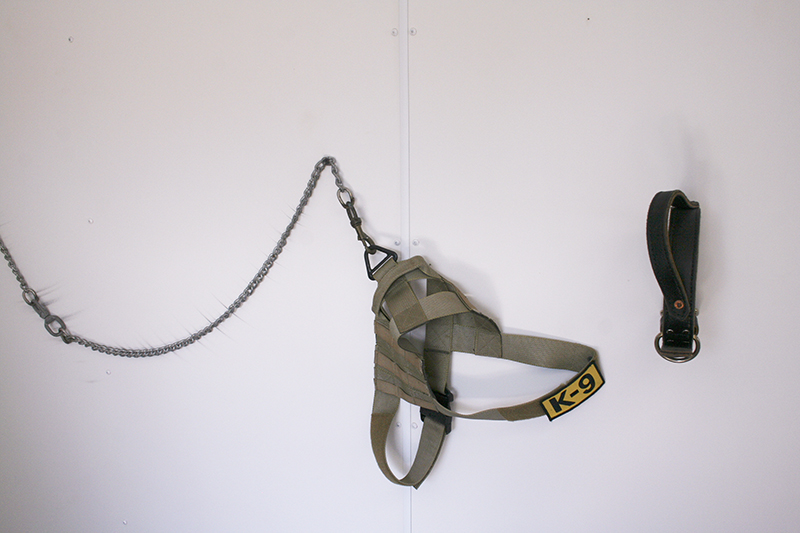 A military dog collar and harness hangs on the wall inside of the Rocky Mountain Dawgs Project trailer. – Emily Wangen/Albert Lea Tribune

Kevin Sonka said he does this to help educate children on the military and soldiers. He believes that schools have not been teaching these lessons and wants that to change. He said through Rocky Mountain Dawgs Project he plans to find more ways to educate students on topics such as the  Sept. 11, 2001, attacks and the military in the future.

Kevin Sonka said he also hopes to give out scholarships to siblings of soldiers who have died. He believes when a soldier is killed in action, the siblings can sometimes be overlooked and wants to help those siblings through scholarships.

Another way Rocky Mountain Dawgs Project wants to help members of the military is through pairing therapy dogs with soldiers diagnosed with post-traumatic stress disorder. Elaine Sonka noted that the help from dogs can be better than medication in some cases. Kevin Sonka said he hopes to raise funds for projects like these to improve the lives of veterans.

Rocky Mountain Dawgs Project does a little bit of everything, according to Kevin Sonka. The organization hosts dinners for service men and women. A traditional dinner includes steak, but Kevin Sonka noted that he will cook whatever the group he is cooking for wants. Kevin Sonka said he enjoys cooking and that if he doesn’t know how to make something requested, he’ll learn.

There is a tradition at the events; the first steak is served using a special spatula, and the spatula was used by David Sonka after being put in charge of grilling at a steak barbecue.

Rocky Mountain Dawgs Project will return to Albert Lea next year, according to Kevin Sonka.