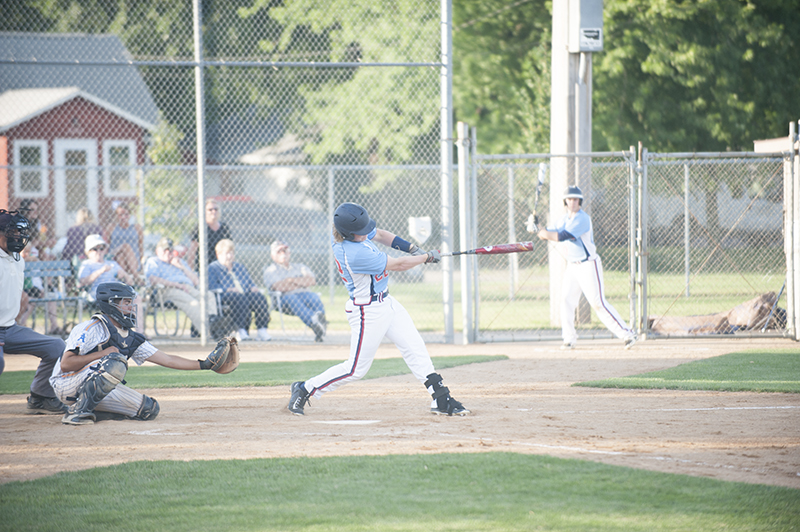 Parker Mullenbach drives in three runs with one swing of the bat in Post 56’s game against the Rochester A’s Friday night at Hayek Field. Jarrod Peterson/Albert Lea Tribune

Less than 24 hours after he was busy driving in runs for the Albert Lea Lakers, Parker Mullenbach was back at it again, doing the same thing for Albert Lea American LegionPost 56 against the Rochester A’s Friday night.

Mullenbach drove in four runs, but Post 56 lost the lead late thanks to a five-run sixth inning for the A’s to win 7-6.

Chris Enderson got the start for Post 56, and he was sailing along through the first five innings. He had only given up two runs on three hits to that point.

With the game tied 2-2, Post 56 put together a power-packed fifth inning.

It started when Mason Hammer reached on an one-out error. Jake Thompson struck out, but advanced to first as the ball got away from the catcher. With runners on second and first, Alex Bledsoe walked to load the bases for Mullenbach.

Instantly, he delivered and sent a ball that one-hopped the fence in centerfield and three runs came across.

That gave Enderson some breathing room.

But things would fall apart for Post 56 in the next inning.

With the bases loaded, Enderson gave way to Jacob Bordewick.

He gave up a two-run single and an RBI single, then threw two wild pitches that allowed two more runs to cross the plate.

Coach Jay Enderson made another pitching change and brought in Blake Simon to close out the inning.

Post 56 put together a rally in its last at-bat.

Hammer hit a one-out single, but was retired when Thompson reached on a fielder’s choice. Bledsoe followed with a single, and then Mullenbach notched his fourth RBI by lacing a single up the middle to score Thompson.

The rally ended with Ben Witham, though. He smoked the ball hard to short, but the shortstop handled it and flipped to second to end the game.

The same two teams will play again on Tuesday at Hayek Field as the playoffs begin.