Myron Elwood Jelle, 88, of Albert Lea, formerly of Bricelyn, died Friday, July 1, 2016 at Mayo Clinic Health System in Albert Lea. A funeral service will be at 2 p.m. today at South Blue Earth Lutheran Church in Seely Township, Faribault County with the Rev. Arne Halbakken officiating. Visitation will be from noon to 2 p.m. prior to the service at the church today. Interment will be at South Blue Earth Lutheran Cemetery. Military honors will be accorded by the Bricelyn American Legion post. Bruss-Heitner Funeral Home of Bricelyn is assisting the family. Please leave online condolences at www.brussheitner.com. 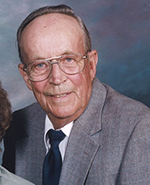 Myron was born July 13, 1927 in Bricelyn, the son of John and Ingeborg (Alfson) Jelle. He graduated from Bricelyn High School and was a staff sergeant in the U.S. Army, serving as a medic in the Korean War. Myron was united in marriage to Shirlee Kern on Dec. 1, 1956, in Easton.

Myron spent his life farming and enjoyed woodworking, fishing, playing cards and watching sports. He loved his time with family and friends, and attending his grandchildren’s activities. Myron was a member of South Blue Earth Lutheran where he served as congregational president and on the cemetery board. He was also a member of the Bricelyn Elevator board and the Nels Lee Post No. 165 in Bricelyn.

Myron is preceded in death by his parents; an infant daughter; brothers Leonard and Ardin; and sisters Alvina, Clarisse and Idella.