Stars and Stripes fill the night 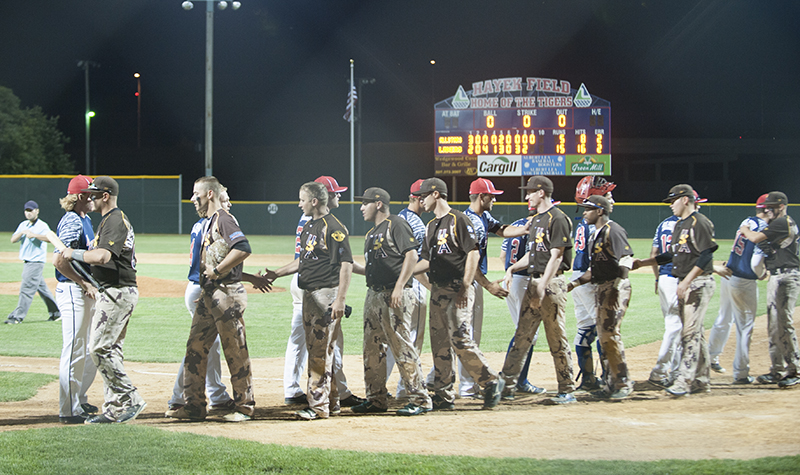 It was more than just a game Thursday.

It was an honor, a salute to heroes past and present.

The U.S. Military All-Stars were in town for a baseball  game Thursday night at Hayek Field.

It’s been a long summer for the All-Stars. They started their tour back in May, making stops in North Carolina, Florida, Wisconsin, Indiana, Illinois, Missouri and Iowa before finally ending up in Albert Lea.

They have made all their trips by bus or car, not chartered flights like our professional athletes. They don’t get paid millions of dollars. Rather, they get paid in smiles and thanks from fans.

It’s been quite the tour for 2016, but it’s not anything these guys can’t handle, for they have already made the ultimate sacrifice.

There was a lot going on at Hayek Field Thursday afternoon.

The gates opened at 4 p.m. and the people immediately started trickling in.

The grill was fired up and the lines for burgers and hot dogs was long.

The beer tent saw some early action, but it was competing with cans of pop that were only $1, so the choice was tough.

World War II veterans were in attendance and given a front row seat for the game. They came from surrounding communities, even getting a private chauffeur to the game.

It ended up being a perfect day for a baseball game.

However, it was more than a game. 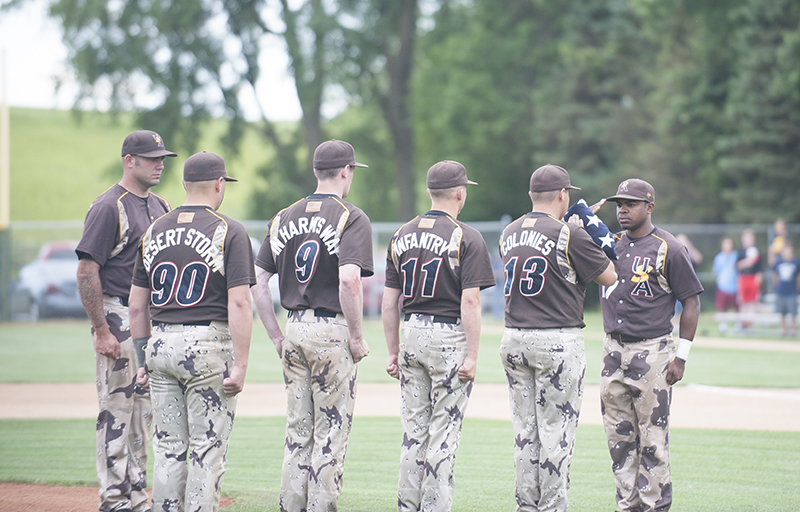 The U.S. Military All-Stars honor the flag of The United States of America before the game Thursday evening at Hayek Field.

Thompson and his Albert Lea teammates — Mason Hammer and Parker Mullenbach — did their part to help the Lakers earn a 15-5 victory.

The All-Stars looked like they were going to run away with the game in the first inning.

Lesean Thomas singled, Trevor Baldwin reached on an error and Zach Douglas singled to load the bases. A walk gave the All-Stars a 1-0 lead, then Bodacious Ball hit a sac fly to make it 2-0. Aaron Savelli grounded into a fielder’s choice, making it 3-0. 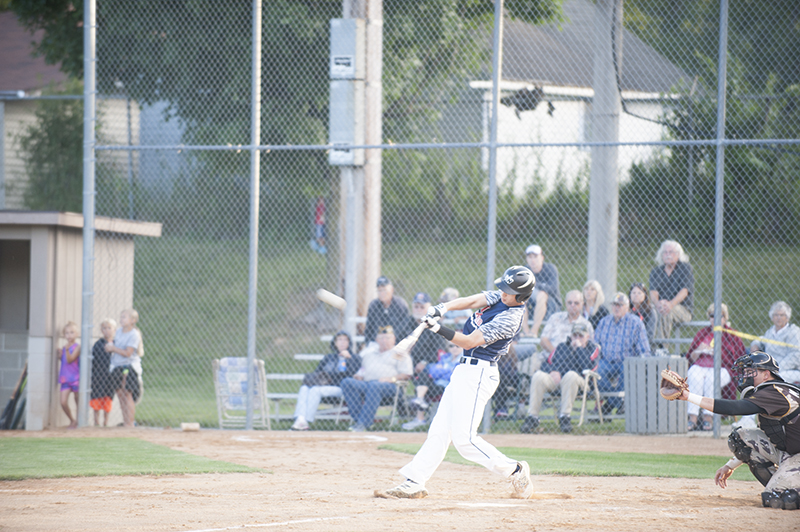 Albert Lea’s Jake Thompson strokes a double in the fourth inning of Thursday’s game. He went 2-6 with an RBI.

But the Lakers would come right back in their first at-bat.

Anthony Stewart led off with  triple on a ball that kept carrying off the bat.

Thompson grounded out, but it allowed Stewart to score. The Lakers would add another run later in the inning.

After a rough first inning, Ben Jacobson settled down on the mound for the Lakers.

He didn’t allow a run for the next three innings. 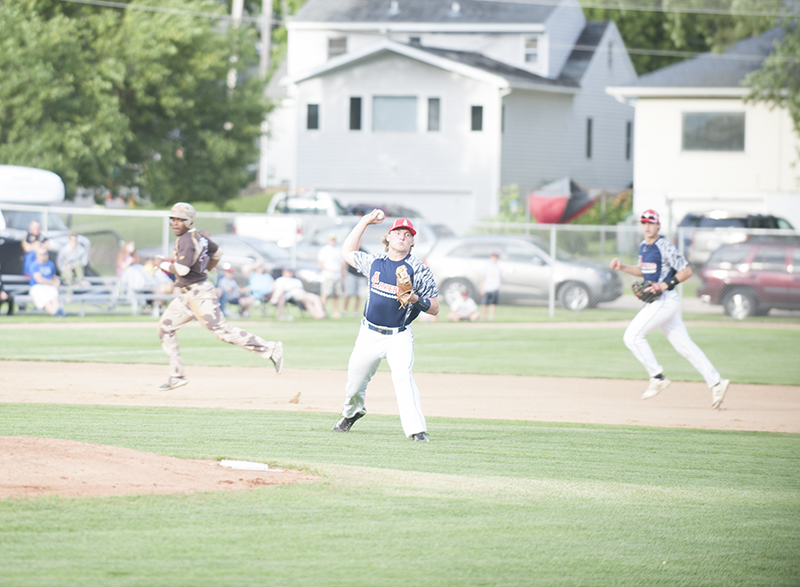 Albert Lea’s Parker Mullenbach makes a throw from the infield grass during Thursday’s game against the Military All-Stars.

In the third inning, the Lakers took the lead for good. Their first run came in on an error, then Mullenbach delivered an RBI single, and Hammer followed with a two-run double to give the Lakers a 6-3 lead.

Mason Hammer drives in two with a double

Thompson led off the fourth inning with a double to left-center and scored on Mullenbach’s second hit of the game.

Down 7-3, the All-Stars did everything they could to get back into the game. After a one-out walk, Ball mashed a two-run homer over the centerfield fence to make it 7-5.

However, that would be all the offense the All-Stars could muster.

In the bottom of the inning, Jake Tank led off with a walk, then Chris Scott hit a moonshot homer that bounced off a ThorneCrest transport van in left field.

That drew a huge laugh from the crowd, as everyone could hear the loud “thump” the ball made off the roof of the van.

The Lakers would steadily add to their lead until their final at-bat.

The final score and who won was not what mattered. Respect, honor and thankfulness did, though.

As the game wore on and started to get out of hand, the All-Stars didn’t get frustrated or mad. Rather, the guys on the bench signed autographs for the little kids in attendance, and they even spent a few minutes talking to them. 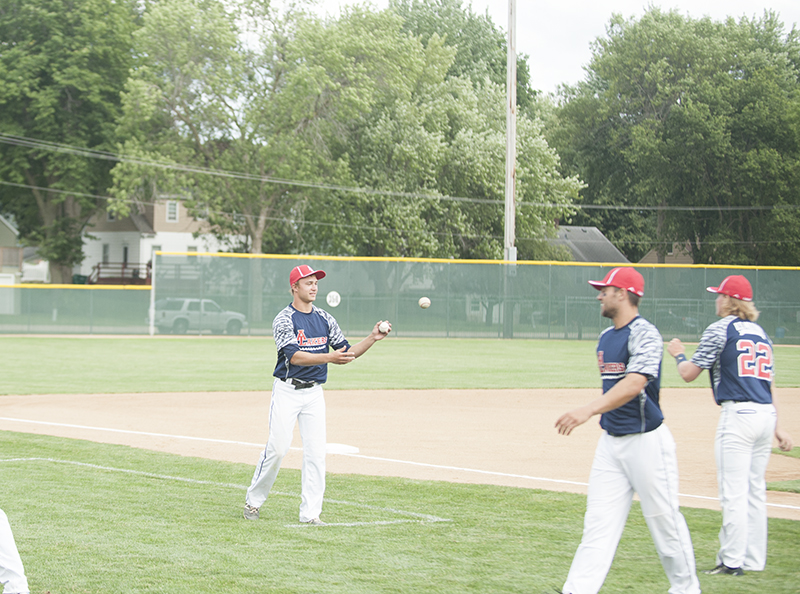 Albert Lea’s Mason Hammer plays toss with a teammate before the game Thursday at Hayek Field.

“I was honored to share the field and play among the men who protect our freedom and allow me to play the sport I love,” Thompson said. “The best part of it was being able to meet the military guys. They were incredibly humble and nice.”

“It was more than a baseball game,” Thompson said. “It was a great experience.”