A teenager arrested in May after an armed robbery in Albert Lea was placed in a correctional program July 21 in Freeborn County District Court. 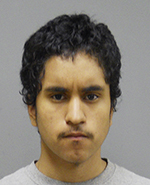 Estrada will be released from custody when he completes the program and will be on supervised probation until he is 21.

Estrada was granted an extended juvenile jurisdiction, meaning he could receive an adult sentence if he does not successfully complete his sentence.

He was sentenced after he pleaded guilty to first-degree aggravated robbery June 27.

He was originally also charged with second-degree assault, but that charge was dismissed.

Estrada reportedly walked up to the counter of the Mileage gas station, 901 W. Main St., May 13 and took out a gun from his jacket pocket, according to court documents. He was reportedly wearing gloves and a mask, repeatedly requesting to put money in his bag.

Estrada was arrested after a foot pursuit west of the gas station a few minutes later with a Minnesota Department of Natural Resources conservation officer. Court documents state when Estrada was taken into custody, he had a handgun sticking out of the front of his pants.

It was removed and found to be a BB gun, though it was a realistic plastic replica of a firearm, the court report states. A white cloth money bag was found on his right side.