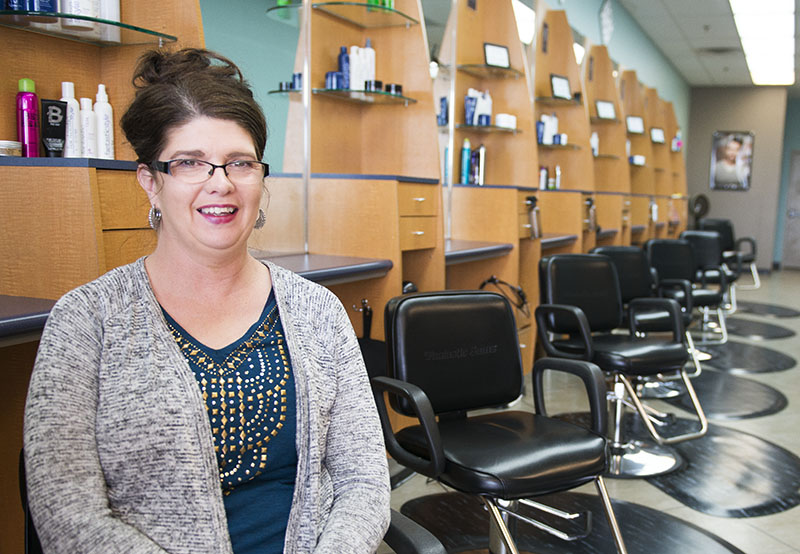 A lifelong passion doubles as a career for one Albert Lea business owner.

Mary Olinger has co-owned the Albert Lea Fantastic Sam’s location since May 2015. Olinger owns the business, at 2352 Hendrickson Road, with Dean Heideman.

Olinger, 48, has been in the cosmetology business since she graduated high school. She said her mother helped steer her toward the career path when Olinger wasn’t sure what she wanted to do.

“She told me, ‘Do something you love to do and it will never feel like a job,’” Olinger said.

The Clear Lake, Iowa, native listened, and worked in salons from the ’80s up to 2000, after which she owned her own salon for 10 years. From there Olinger joined Fantastic Sam’s as a stylist, becoming a manager of the Mason City, Iowa, location in 2011, and the manager of both the Mason City and Albert Lea locations in 2014. Heideman was a customer at the Mason City location, and agreed to join Olinger in her efforts to own her own Fantastic Sam’s franchises.

Olinger and Heideman bought the Mason City and Albert Lea locations from David and Lisa Schultz in 2015, a transition that Olinger said was seamless. Olinger believed that was due in part to her having already been a manager at both locations.

“People didn’t even really notice it had happened, so that’s great,” she said.

Olinger is also opening up her third Fantastic Sam’s location, which will also be in Mason City, and hopes to eventually own five franchises all together. She lives in Clear Lake with her husband and their three children, and is still a licensed cosmetologist in both Minnesota and Iowa. Olinger said she is one of only a few Fantastic Sam’s franchise owners who still cut hair.

While her managerial and ownership duties take up a lot of her time, Olinger said she has regulars she still takes care of at her locations. She likened herself to acting more like a general manager kind of owner as opposed to being an owner who focuses solely on operations.

An aspect Olinger has enjoyed since taking a leadership role within the company is getting to see employees grow and move into managerial positions themselves. She said there is a lot of room and potential to grow within the company and that she especially likes to promote from within at her locations. Olinger holds her staff in high regard, and has had quite the history with them.

After having what she called a phenomenal year in 2013 as a manager, Olinger was diagnosed with breast cancer in 2014. She had to have a double mastectomy, hysterectomy and reconstructive surgery, and leaned on the support of her employees during the process. She said she asked her employees to “keep the train on the tracks” during her absence when she had to miss work for surgeries and recovery time, and she said her staff went above and beyond to keep things moving at work.

“You come to work, put your smiley face on and do your job,” Olinger said.

She said it has been and continues to be her mission to make sure her franchises are set up for anything that could come up out of nowhere in life, and that the great teams she has at both of her locations have helped carry out that mission of preparedness.

“We have awesome teams,” she said. “They’ve been through a lot. … I can’t say enough nice things about them.”