Funeral services for Martin S. Mulso, 96, of Sherburn will be at 10:30 a.m. Thursday at St. John’s Lutheran Church in Sherburn. The Rev. Steven D. Wilson will officiate. Burial will be in Sherburn Cemetery.

Martin was called to his eternal rest on Monday, Aug. 15, 2016, at St. John’s Lutheran Community in Albert Lea. He was 96 years, 7 months and 18 days old. He had been a resident the facility since October 2006. Visitation will be from 5 to 7 p.m. Wednesday at Kramer Family Funeral Home in Sherburn and one hour prior to the service at the church on Thursday. Messages of sympathy may be sent to the family online at www.kramerfuneralhome.com. 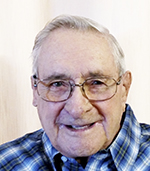 Martin Selmer Mulso was born Dec. 28, 1919, in Colome, South Dakota. He was the youngest of four sons born to Frederick and Mary (Breezer) Mulso. Martin was baptized at Zion Lutheran Church in Colome and confirmed in 1934 at Trinity Lutheran Church in Monterey. Martin lived on the family farm in South Dakota until 1932, when the grasshoppers forced the family to move back to Minnesota. He attended School District No. 86 for two years, then attended School District No. 50 for two years. He then farmed with his father until his passing in 1943.

On Jan. 21, 1942, he married Ruth Ann C. Meyer in a double wedding ceremony with Bud Lund and Eunice Meyer in Sherburn. To this marriage two sons were born. They later divorced. In 1944-45 he bought a truck and hauled gravel in the summer and ice in the winter. Martin farmed in Elm Creek and Jay Township until 1967. He then started driving truck for his brother, Elmer Mulso, before driving for Meyer Brothers and Gaalsywk Brothers until his retirement at the age of 70. Probably the most memorable trips he took were the ones to Alaska. Martin was a member of St. John’s Lutheran  Church in Sherburn.