Ralph Lavern Sauer, 84, of Madison Lake died Sunday, Aug. 21, 2016, at Mayo Clinic Health System in Mankato. A funeral service will be at 11 a.m. Friday at United Lutheran Church of Walters. The Rev. Donald Rose will officiate. Visitation will be from 5 to 8 p.m. Thursday at Bruss-Heitner Funeral Home in Wells, and continue one hour prior to the service at the church on Friday. Interment will be at the Walters Cemetery at a later date. Bruss-Heitner Funeral Home in Wells is assisting the family. To leave an online condolence, visit www.brussheitner.com. 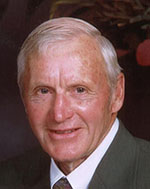 Ralph was born May 25, 1932, in Walters, the son of Vern and Clara (Enser) Sauer. He was baptized and confirmed at Faith Lutheran Church in Walters. Ralph graduated from Kiester High School in 1950. He entered the United States Navy in 1950 to honorably serve his country. He studied at the Milwaukee School of Engineering, and later attended Mankato State University, where he obtained a bachelor of science and a master’s degree. He worked for Unisys until retirement. He was proud to have been a Mason for many years. Ralph always had a love of farming. He was a jack of all trades, and took pride in being able to repair anything. He had a passion for traveling the United States, and the world. He enjoyed delivering motorhomes for Winnebago. Ralph especially loved to dance. He spent much of his free time dancing and met many dear friends along the way.