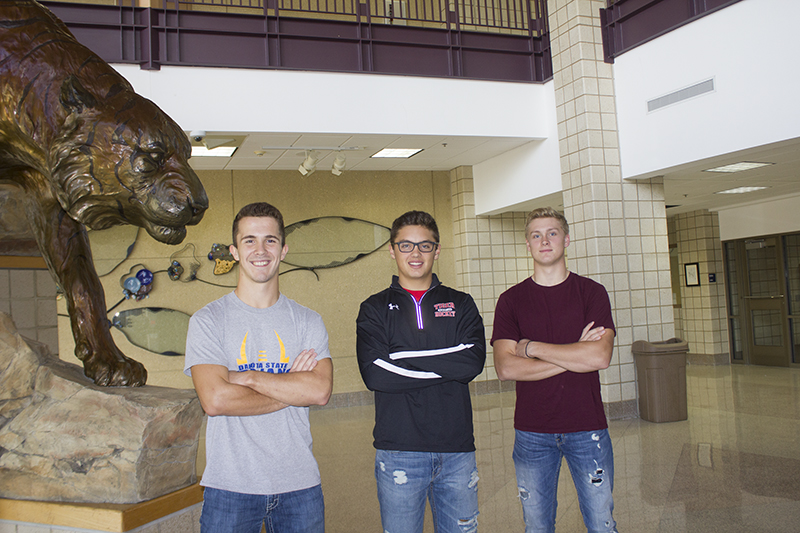 Albert Lea seniors Trent Johnston, Sam Chalmers and Ben Witham were able to get a glimpse into their future by job-shadowing. — Sam Wilmes/Albert Lea Tribune

Three Albert Lea High School seniors say they are pleased that they were given a first-hand look into professions through a community program, which focuses on giving practical education and learning experience to high school students.

Sam Chalmers, Ben Witham and Trent Johnston job shadowed for one day at several community businesses this spring and this summer as part of the Albert Lea Greater Education Project.

While job shadowing at Alliance Benefit Group Financial Services Inc., Chalmers was given a glimpse of what the company does and was given a seminar of a new online system the business is installing.

While job shadowing at Eaton Sport & Spine, Johnston got to sit in on appointments and saw chiropractor Jeff Eaton make patient adjustments. Johnston was given the background of the business and the profession.

Witham job shadowed at Church Offset Printing Inc. He was given a tour of the building and an overview of printers, ink and paper the company uses.

The Albert Lea Greater Education Project aims to have students consider career trends and learn about new careers that will open up after aging employees retire that may not include a four-year degree.

“It was interesting just to see how they operate,” he said.

Chalmers is looking to study international business and has narrowed his college search to St. John’s University or the University of Gonzaga.

Johnston said through job shadowing he gained a better understanding that he wants to be a chiropractor.

“I kind of got a firm grip of what I want to do when I get out of high school,” he said, noting his interest in the profession stems from his passion for people.

“I have always been interested in doing that, because I enjoy making people feel better,” Johnston said.

Seventy businesses in Albert Lea have made themselves available for job-shadowing opportunities and 125 jobs in the city are available for shadowing.

The project has an advisory board, and was sparked from the Education Foundation of Albert Lea’s 2015 public forum. Established by Lyman K. “Manny” Steil, the project has been supported financially by John and Susan Morrison.

“It’s a great opportunity to learn something, and get out of school for a couple of hours,” he said.