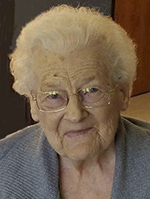 Lutheran Church in Albert Lea. She worked for J.C. Penney in Albert Lea and then at Burr Oak Manor and the Country Kitchen in Austin. Betty later owned and operated the Old Colony Board and Care, now the Carlson Home. Throughout her married life Betty was a homemaker who loved to bake and sew. Her family was very important to her. She was a member of Holy Cross Lutheran Church. Betty will be dearly missed by her family and friends.

She was preceded in death by her parents Esther and Ervin Stanton; her husband, Eugene Johnson; her sister, Maxine; and brothers-in-law Kenneth and Gilbert.

Funeral services will be at 10:30 a.m. Monday at Holy Cross Lutheran Church in Austin. The Rev. Larry LaDassor will officiate. Visitation will be from 2 to 4 p.m. Sunday at Worlein Funeral Home in Austin and for one hour prior to the service Monday at the church. Interment will follow the service at Oakwood Cemetery in Austin. Condolences may be expressed to the family online at www.worlein.com.