The Rev. Donald W. Zenk, 90, of Austin passed away peacefully, Saturday, Sept. 10, 2016, at Sacred Heart Care Center in Austin, after a short battle with cancer. 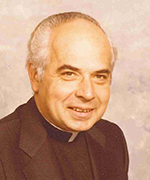 He grew up on the family farm in rural Winona, attended country schools and graduated from Winona High School. After high school, he stayed on the farm for a year before joining the Army, where he spent two years stationed at Fort Hood in Texas and Fort Ord in California. While at Fort Ord, he began his studies toward the priesthood with the Chaplain, The Rev. Bolla, who spent time with him studying Latin. After his service in the Army, he enrolled in Loras College in Dubuque, Iowa. During summer breaks, he drove a Pepsi Cola truck, delivering in small towns throughout western Wisconsin.

Donald completed his studies for the priesthood at St. Paul Seminary in St. Paul and was ordained June 6, 1954, at the Cathedral of the Sacred Heart in Winona, as part of the largest class ever ordained in the Diocese of Winona. He served many parishes in southern Minnesota, always ready to serve wherever he was assigned by the bishop.

His shining hour was when Bishop Fitzgerald contacted him about starting an additional parish in Rochester, to serve the growing population there, founding The Church of the Resurrection in April 1967. While the first masses were held in an airport hangar, on Dec. 24, 1968, midnight mass was the first mass held in the new parish center. The resurrection was complete.

He had a variety of interests, but his reputation as the beekeeper was well-established, a hobby he stayed with well into his golden years. He was a happy man, thoroughly enjoying his years as a priest. He has many long and happy friendships, caring deeply for his family and his parish families from all the cities he served.

He was preceded in death by his parents; brother, Gerald Zenk; sister-in-law, Catherine Zenk.

A Mass of Christian burial will be at 11 a.m. Saturday at St. Edward’s Catholic Church in Austin. The Bishop John Quinn will officiate. Interment will be at 3:30 p.m. Saturday at St. Mary’s Cemetery in Winona. Visitation will be Friday at Mayer Funeral Home. The Knights of Columbus Rosary will be at 6:30 p.m. and friends and family may call from 7 to 8:30 p.m. There will also be visitation Saturday one hour before the Mass at St. Edward’s Church. Military rites will be by American Legion Post  No. 91 and the Knights of Columbus Council 1201 will be present.

Mayer Funeral Home is in charge of arrangements. Condolences may be left online at www.mayerfh.com.