Faye Maxine (Willits) Olson of Albert Lea died peacefully Tuesday, Sept. 20, 2016, at St. John’s Lutheran Community. She was 98. A memorial service will be at 2 p.m. Oct. 1, 2016 at Hayward Lutheran Church. Visitation will be one hour prior to the service at the church. The Rev. Joshua Enderson will officiate. Interment will follow at Hayward Cemetery. 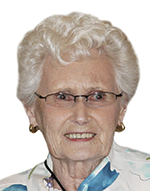 Faye was born April 25, 1918, to Guy and Ruth (Kennard) Willits in LeGrand, Iowa, later moving to Albert Lea, where she graduated from Albert Lea High School in 1936. On Oct. 13, 1940, she married Rudolph (Rudy) Olson at the parsonage of Hayward Lutheran Church, where she became a lifelong member and was very active at the church. She served on several boards, committees, and was instrumental in the design and purchase of the church’s stained glass windows.

From 1942 to 1948, Faye and Rudy lived in Minneapolis, where Rudy worked for Northwest Airlines in the war effort and Faye worked at Taylor Pharmacy. In 1950, they returned to Hayward and opened Rudy and Faye’s Cafe on the Hayward corner. The couple later built a home on Albert Lea Lake, and Faye started work at the Albert Lea Veterinary Clinic — where she worked for 30-some years until her retirement. After retirement, they moved to Albert Lea, near Fountain Lake. Faye was a member of the Eastern Star and the Elks Club. She was an avid card player and loved to travel.

Faye is survived by two sons and daughters-in-law, Tyrone and Kathryn of Colorado Springs, Colorado, and Keith and Judy of San Juan; two grandsons, Scott of San Diego and Christopher (Ronda) of Denver; two great-grandsons, Isaac and Blake; brother, Jerry (Patricia) Willits of St. Croix Falls; and many nieces and nephews. She was preceded in death by her parents; husband, Rudy Olson, in 1993; and sister, Marie Lamoreux.

The family wishes to extend their thanks and gratitude to the caregivers at St. John’s Sheltering Arms and a special thank you to niece, Vicky Sarner, and nephew, Jon Lamoreux, for their frequent visits with Faye.

In lieu of flowers, the family requests memorials be made to the Hayward Lutheran Church in Hayward.