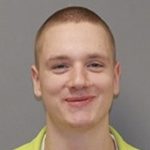 According to the Albert Lea Police Department, an officer was heading east on Fountain Street when he noticed a white 2006 Chevy Malibu heading north on Washington Avenue that he suspected was used in recent burglaries in Faribault County.

The vehicle apparently did not stop for a red light at the intersection of Newton Avenue and Main Street while traffic was entering the intersection. After nearly running into a crossing vehicle, Dahl reportedly lost control of his car and crashed head-on into a parked car that was facing north on Newton Avenue, at about 7:45 p.m.

Dahl and the passenger in the vehicle, Cheyenne Debra Goodhart, 20, of Albert Lea, were transported to Mayo Clinic Health System in Albert Lea.

Dahl reportedly suffered a broken leg in the collision. Goodhart’s condition is unknown.

Baggies that field-tested positive for methamphetamine were reportedly found in the vehicle.