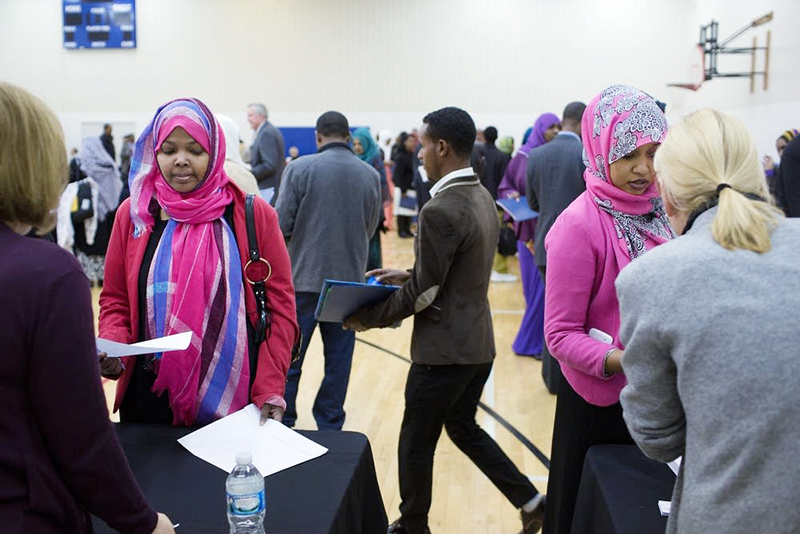 Wages across Minnesota are finally showing signs of recovering from the Great Recession. Census data released Thursday show increases in median household income last year across most demographic groups, although racial disparities in the state persist.

Minnesota state demographer Susan Brower said other states are also experiencing similar increases in household income. Household incomes in the state, however, have stagnated for years and have yet to reach pre-recession levels.

“It has been a slow recovery in terms of incomes, so that makes this release what we’ve been waiting for for some time, to see some of those incomes begin to rise,” Brower said.

The data show gains for a broad swath of the state’s population, including most racial groups.

“The picture overall for Minnesota does look very good,” Brower said. “The state saw “reductions in the number and the prevalence of poverty for children under 18, of working age people and older adults, as well as Minnesotans who identify themselves as American Indian, black or non-Hispanic white.”

“What we’re seeing is that more black Minnesota residents are moving into the labor force, fewer are unemployed, more are working, and more are working in full-time jobs, as compared to 2014,” Brower said. “Despite these positive signs, many of these new opportunities have not yet translated into an increase in the rewards for work for black Minnesotans.”

“There are a number of demographic and economic and social reasons that we’re seeing those disparities,” Brower said. “There’s probably not one single reason, but many — and the factors that are causing those disparities run deep, and they’re complicated and they’re built into our institutions and our practices, so these are things that we’re going to have to continue to examine, and change our behavior, as residents of Minnesota.”

It’s difficult to tell from the data alone why the disparities persist, but Wilder Research’s Craig Helmstetter describes it as a “threat to the continued prosperity of the Twin Cities region and really the state as a whole.”

“We’ve come to refer to this as the Minnesota paradox,” Helmstetter said. “Minnesota overall has a really high quality of life, a relatively highly-educated and high-income state on one hand. On the other hand, we have among the very worst disparities in the nation.”

Educational attainment is one area that appears to affect the racial disparities in earnings, although Helmstetter said other policy proposals like a higher minimum wage may also affect the gap.

“When we control for education and compare incomes for black Minnesotans to others at similar levels of education, much of the gap goes away, but not nearly all of it,” Helmstetter said. “So education is part of the solution, although not all of it.”

The drop in 2014 income for black Minnesotans triggered a response last year from community groups and political leaders. Gov. Mark Dayton pushed $100 million in funding to try to address the disparities. The Legislature eventually approved a scaled back $35 million spending package.

Dayton said in a statement that the income gap between people of color and whites in Minnesota was still at unacceptable levels. He said the $35 million package passed by the Legislature was an important first step.

“These disparities should reaffirm for all Minnesota leaders — in the public, nonprofit, and private sectors — the need to redouble our efforts to reduce and ultimately eliminate racial disparities,” Dayton said. “We must continue working to ensure that our state provides full and equal opportunities to all Minnesotans.”

Anthony Newby, executive director of Minneapolis-based Neighborhoods Organizing for Change, said he’s encouraged that political leaders from both parties took proposals from communities of color seriously and supported the package.

“Embedded in that $35 million are things like job training, deliberate ways that we feel like the state can invest in building more infrastructure and more wealth creation for black and brown families,” Newby said. “It was a good start, and we feel like it opens the door for conversations going forward, including in 2017, about continued access to resources and policies that again will help bridge these equity gaps.”

Newby and NOC joined other community groups in unveiling the United Black Legislative Agenda last session. Newby said they plan to push for more support for programs to close the gap at the Legislature next session.

“We think with more and better and deliberate and sharpened investment in communities of color, including the black community — that’s the only way the state has a chance to create real wealth and prosperity for all of our citizens, for everybody, not just a select few,” Newby said.

Apart from legislative efforts, NOC is among the groups pushing for an increase in the minimum wage in Minneapolis to $15 an hour. They believe a higher minimum wage would also help address income disparities.

“For us, it’s not a simple moral issue or just a racial justice issue, it’s a pragmatic issue of improving the quality of life for all citizens, including those who have been historically left out of the conversation and left out of the benefits of our thriving economy,” Newby said. “Unless we have a deliberate plan to do that, it simply won’t happen.”

Census data released earlier this week shows that Minnesota also has one of the lowest poverty rates in the country and is among the highest rates of insured residents.