Robert A. Jacobs of Albert Lea, formerly of Alden, went home to be with the Lord. A celebration of his life will be at 10 a.m.  Saturday at Redeemer Lutheran Church in Alden. The Rev. Greg Ofsdahl will officiate. Interment will be in Alden Cemetery. Friends may visit with family from 5 to 8 p.m. Friday at Bonnerup Funeral Service, and one hour before the service at the church. 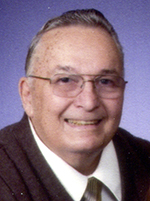 Robert passed away Friday, Sept. 23, 2016, at St. Marys Hospital in Rochester, surrounded by his wife, Mavis, and family.

He was born Oct. 11, 1941, in Albert Lea, the son of James A. and Alvina Dorthea(Olsen) Jacobs. He married his high school sweetheart, Mavis E. Solland, on Oct. 16, 1960, at Grace Lutheran Church in Albert Lea. They celebrated 56 years together. The couple had farmed for 40 years. Throughout his life he was also an over the road truck driver.  Together with Mavis they had traveled more than four million miles with the opportunity to see all of the United States.  Following his passion for travelling, Robert and Mavis had also made leisure trips to Alaska, the Bahamas, Mexico, Hawaii, the Virgin Islands and took a Caribbean cruise.

Very much a family man, Robert loved spending time with his family, especially his grandchildren, and was always up for a good game of cards. He also really appreciated having exchange students join the family fold His interests were broad as he also enjoyed camping, campfires, boating, horses and snowmobiling.

Robert will be greatly missed by his family and always remembered for his kind and generous spirit.