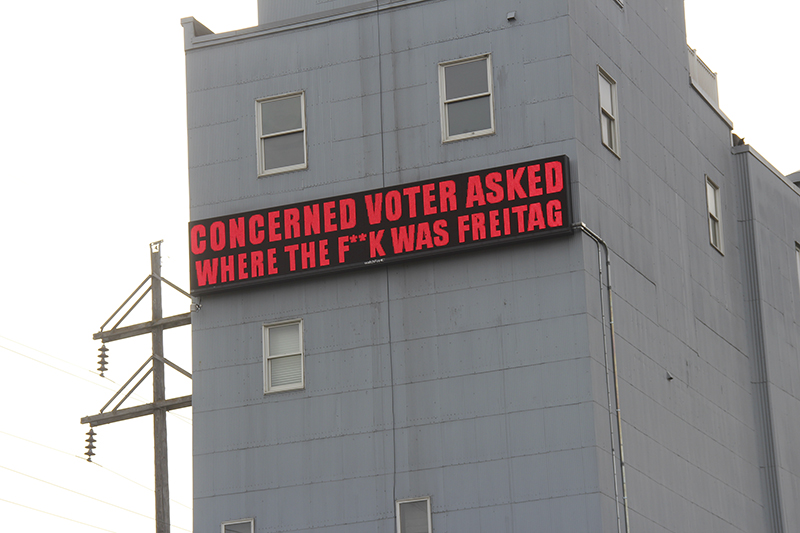 A digital sign on the side of Dima Corp. 400 W. Front St., is causing controversy in the community. Sarah Stultz/Albert Lea Tribune

Freeborn County Sheriff Kurt Freitag is speaking out after a controversial sign was posted on the side of a business in Albert Lea on Monday.

Freitag said the sign, on the side of Dima Corp., 400 W. Front St., originated after a law enforcement agency visited the business. The sheriff said a separate agency is conducting an investigation, but he could not release any other details other than to note that it did not involve the Sheriff’s Office. It is unclear if the law enforcement agency came to the Dima Corp. location in or outside of Albert Lea.

The sheriff said Dima Corp. owner Mal Prinzing called him after the agency arrived and reportedly demanded that he put a stop to law enforcement activities taking place at his business.

Freitag said he reportedly told Prinzing he wouldn’t because the officers were not from the Sheriff’s Office and because he nor anyone else could stop action stemming from a judge’s order.

“That’s not to mention all the ethical violations involved as well,” Freitag wrote on a Facebook post on the Sheriff’s Office page. “Next time your business practices get you in hot water, don’t ask, ‘Where was Freitag?’ It’s your business, not mine. Ask yourself, “Where were you?”

The sheriff said the sign, which states, “Concerned voter asked where the (expletive) was Freitag?” was posted Monday morning.

“I was absolutely floored when I saw that sign,” Freitag said.

He said Prinzing has supported the Sheriff’s Office in the past with its K-9 fundraisers, and he has even gone to lunch with Prinzing a few times before. Freitag said he enjoys listening to Prinzing’s stories from his time in World War II.

The sheriff said after the sign was posted he tried calling Prinzing to talk to him, but Prinzing has reportedly not returned his call. When Freitag drove over to the business, no one came to the door.

“I wanted to explain to him a little more in detail why I can’t and won’t do anything,” Freitag said. He said he advised Prinzing to be polite and cooperate with authorities, after which Prinzing reportedly hung up on him.

A representative reached at Dima Corp. on Tuesday declined to comment.