Funeral services for William “Bill” H. Vosler of Albert Lea will be at 10 a.m. Saturday, Oct. 22, 2016, at St. Theodore Catholic Church in Albert Lea. The Rev. Russell Scepaniak will officiate. Visitation will be from 4 to 7 p.m. Friday at Bonnerup Funeral Service and one hour prior to the service at the church. Interment will be in St. Theodore Catholic Cemetery. 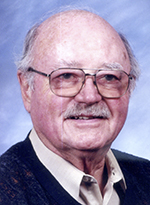 Bill was born Aug. 28, 1925, in Conception, Iowa, the son of Harry G. and Susan (Loechler) Vosler. He grew up in the Wabasha and Lake City areas and was a graduate of Lake City High School. Bill served in the Minnesota National Guard from 1940 through 1950. He then worked in Independence, Iowa, at Woodward’s Clothing Store. He moved to Blue Earth, where he met his wife, Marie F. Gallagher, and they were married May 30, 1950. In 1951 they moved to Humboldt, Iowa. In 1956, the couple moved to Albert Lea, where he worked at Leuthold’s Clothing Store. Bill became sales manager for Drug Supply in Albert Lea, where he worked until retiring. He then owned and operated Heartland Country Auto Sales for many years.

Bill was a member of St. Theodore Catholic Church, an active member of the Albert Lea/Austin Community Band, the Over 60 band and was the leader of the Alley Katz Band, where he played the trumpet.

He was preceded in death by his parents; daughter, Mary; and son-in-law Mark Mensing; and father-in-law and mother-in-law, Robert and Zoa Gallagher.