Al Batt: The season of the great pumpkins is — once again — upon us all 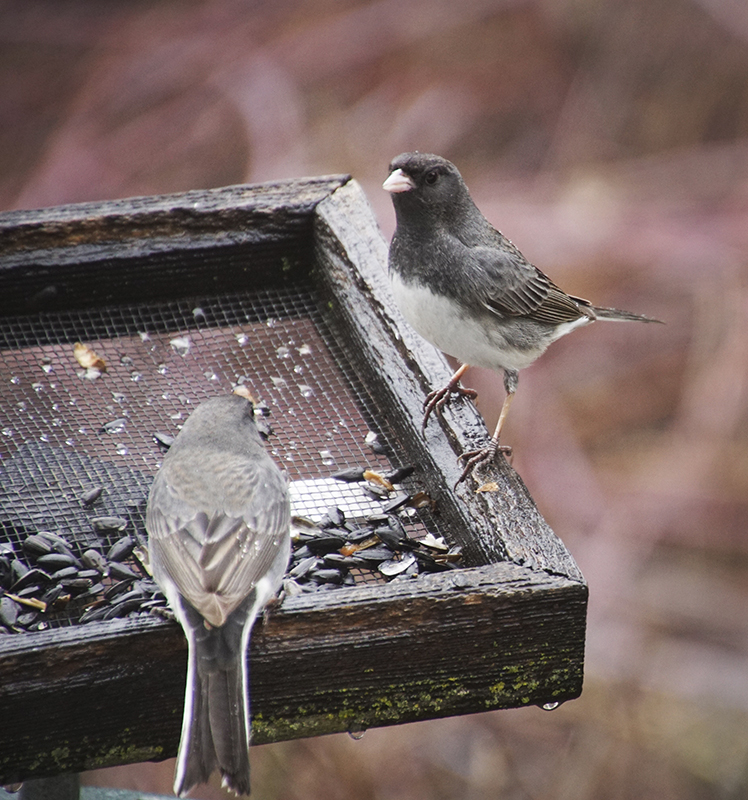 Birds who decide not to migrate for the winter are dependent on feeders to get them by until spring. Al Batt/Albert Lea Tribune

“Everything is nearly copacetic. Each harvest season, I’m reminded how well rocks grow here. That’s OK. The rocks don’t need to be fed, they don’t get out onto the road and they make good soup. Pop told me about a 10-pound bass he’d caught after fighting it for three hours. I’d seen a photo of that fish. I told him that I doubted that bass weighed over a pound.”

“What did your father say about that?” I say.

“He reckoned that a fish loses a lot of weight during three hours of fighting. The other day, Pop parked downtown and went into the bank to have them count his money–again. When he came back to his truck, he discovered it was out of gas. He grabbed a gas can and trudged a few blocks to Fuel’s Paradise and bought gas. He lugged it back and poured the gas into the tank. Then he noticed that he’d filled the gas tank of an identical truck to his. He walked back to the station to get more gas. The clerk said, ‘Instead of walking back and forth to fill the tank, you should put a couple of gallons in it and drive your truck here.’”

A peek into the shed showed that house sparrows were living happily ever after. They chirped cheerfully. House sparrows always sound so happy.

I didn’t see a dark-eyed junco. Growing up, I heard that a snowbird’s appearance indicated four or six weeks to the first trackable snow. That’s depending upon the teller. In 2013 it snowed 28 days after a junco arrived here. In 2014 it was 31 days and it was 44 days in 2015.

Corn was being harvested. An ear of corn will typically have an even number of rows, averaging 14 to 18. A bushel of corn weighs about 56 pounds and contains approximately 90,000 kernels, some of which spill on the road while being hauled and feed the wild animals.

There was a robust population of minute pirate bugs, more commonly called no-see-ums, nearly invisible insects that bite with a punch far above their weight class.

I love fall, but it usually leaves me feeling cheated as it leaves so soon.

A friend made a bird feeder out of a pumpkin. He cut a small pumpkin in half and scooped out the soft insides leaving a shell about a half-inch thick. He provided perches by making small holes in the shell of the gourd and inserting a dowel through them. He hung the pumpkin via a wire attached to the dowel. He put some peanut butter on a pine cone inside the pumpkin to make it more enticing.

What will be the national bird of Canada?

The Royal Canadian Geographical Society has come up with five finalists–common loon, snowy owl, gray jay, Canada goose and black-capped chickadee. The Society will present its recommendation for Canada’s National Bird in the December 2016 issue of Canadian Geographic.

Harvey Benson of Harmony asked what could be digging into mole tunnels. I’ve seen digging around mole tunnels. It was the work of skunks and raccoons looking for grubs and earthworms. Moles are there for the same reason. Moles (M for meat) feed on grub worms and earthworms. They aren’t to be confused with voles (V for vegetarian) that eat plant material. Not all predators are able to dig, but foxes, raccoons, skunks, coyotes, weasels, badgers, cats, dogs, hawks and owls will get after moles. I’d think it would take a lot of gravy to make a mole palatable.

Grace Schrunk wrote that she was amazed at a hummingbird’s memory. She put a feeder out several years ago and the hummingbirds return year after year to feed at it. She asked about their ability to recollect. An elephant is the animal portrayed to have a prodigious memory and it would take many hummingbirds to make one elephant, but a combination of field and laboratory research has found that a hummingbird remembers the nectar quality and content of individual flowers, nectar-refilling rates of flowers, the location of every flower in its territory and where the feeders are, both in territory and on migration routes. The hippocampus of a hummingbird — the area of the brain responsible for learning and memory — is as much as five times larger than those in songbirds, seabirds and woodpeckers.

“I see little insects in my bathroom that look to be a cross between a moth and a stealth bomber. What are they?” Drain flies (also known as moth flies or bathroom flies) appear suddenly and mysteriously around showers, bathtubs, sinks and floor drains, especially in basements. They are tiny — 1/5 to 1/6 inch long — dark insects with long antennae, fuzzy bodies and wings. The wings are held out to the side, which gives them a moth-like appearance — hence the name “moth fly.” They are weak fliers and make irregular, hesitant and short flights.

“Everybody needs … places to play in and pray in where nature may heal and give strength.” — John Muir

“And I urge you to please notice when you are happy, and exclaim or murmur or think at some point, ‘If this isn’t nice, I don’t know what is.” — Kurt Vonnegut