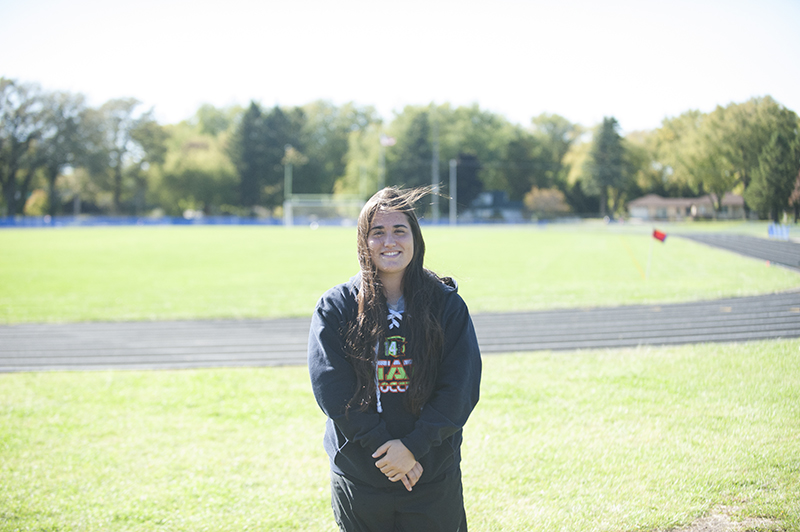 Albert Lea senior goalkeeper Kathryn Flaherty helped the Tigers girls' soccer team to a 9-6 record in the regular season and a win in the first round of the section tournament. She has six shutouts this season. Jarrod Peterson/Albert Lea Tribune

Developing a passion for something doesn’t take too long, especially when one is young.

For Albert Lea High School senior Kathryn Flaherty, soccer was something that started when she was just a little girl.

“I got started with soccer by playing off the wall at the YMCA,” Flaherty said. “My mom kind of got me involved in it. I love playing sports, but I always kind of had a passion for soccer.”

It makes it pretty easy to enjoy something when a child’s parents are behind them 100 percent.

“My mom and dad are at all of mine and my siblings’ games,” Flaherty said. “They would be the first ones to call or text after a game, no matter the result. They have been extremely supportive. They would even come to our music concerts.”

Soccer isn’t the only sport Flaherty has played, though. She is still active in basketball and softball, and plays all three sports for Albert Lea High School.

But soccer is her favorite.

“Soccer is my No. 1 because I have a lot of great memories,” she said. “I have played in some very competitive games, and I have had a lot of fun playing it.”

Flaherty has helped the Albert Lea girls’ soccer team turn around its misfortune in 2015 by solidifying herself as stopper in goal for the Tigers in 2016. The senior has posted six shutouts on the season, including one in the Tigers’ section game against New Ulm Monday night.

Her great season should come as no surprise, though. Flaherty and a couple of other girls from Albert Lea’s team joined forces with Owatonna over the summer and won the state tournament. Flaherty was the starting goalie for that team.

“It was a lot of fun,” Flaherty said. “I had a lot of fun playing with the Owatonna girls and getting to know them. It was also fun to play those same girls this fall and come away with a 1-0 victory.”

“We talked before the season, saying it’s a new year,” she said. “Even if we had had a good year last year, we said we can’t expect it to turn out the same way. We all made the commitment that we were going to be competitive every game this season.”

The Tigers finished the regular season 9-6, won their first section game and will now move on to play Northfield.

“We made it a priority this season to make sure we take advantage of every opportunity and to make every shot and touch count,” Flaherty said. “We really stay on each other during warmups and during practices. Keeping everyone focused is the biggest key.”

Aside from soccer, Flaherty was a part of the 2016 Homecoming Royalty, of which she was happy to have a part in.

“I was honored to be chosen by my classmates,” she said.

After she graduates, Flaherty said she plans on attending college. She doesn’t know what she would like to study, but she said she really enjoys math and writing.

When she has some free time, she likes to fish and hang out with her friends and family.

Her biggest accomplishment was being named to Minnesota State High School League All-Tournament Team as a sophomore in 2014, as she helped Albert Lea reach the quarterfinals where it lost to Park Center, 1-0.

“It was a really cool moment,” Flaherty said. “Obviously, it being the state tournament, it was a huge game. It was a big honor to be chosen.”

But her work is far from over. With a victory Monday, Flaherty and her teammates will host Northfield in the second round of the section tournament Thursday night. She has the bar set pretty high for her team and herself.

“I expect to not get scored on,” she said. “At least that’s my goal. Everything we have done this season has been in preparation for sections or whatever comes next. Every play that comes my way, I expect to make it.”