Funeral services for Delphine Helen Pence of Albert Lea will be at 11 a.m. Wednesday at Bonnerup Funeral Service in Albert Lea. The Rev. Mark Boorsma will officiate. Visitation will be held one hour prior to the service. Interment will be in Geneva Cemetery in Geneva. 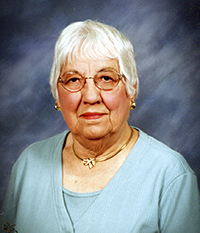 Delphine was born Jan. 4, 1922, the daughter of Hans and Helen (Grunwald) Peterson in rural Clarks Grove. There she was raised and attended country school. Delphine was employed at Hormel in Austin prior to meeting Philip Pence, whom she married April 20, 1945, in Geneva, where they made their home for many years. Delphine enjoyed spending time with her family, housekeeping, canning, working in her flower gardens, volunteer work at church and going on fishing trips up north with family and friends.

In later years they owned Phil’s Saddleshop, which they had in their home. Delphine helped run the saddle shop while Philip continued working. After Philip’s retirement, they sold the saddle shop and moved to Albert Lea. In Albert Lea she became a member of Ascension Lutheran Church, Eagle’s Club and the senior center. She enjoyed playing bingo every Wednesday and Friday afternoon at the senior center, going out for supper and also loved to meet friends for coffee at the old Skyline mall. She had a great love for her grandchildren and great-grandchildren.

Delphine was preceded in death by her parents; husband, Philip; sister, Phyllis Peterson; brothers Roger and Chris Peterson; and one nephew, Chad Peterson.

The family would like to express sincere gratitude for the exceptional care Delphine received at Good Samaritan Society.