Knights move to .500 as they hold on to beat Randolph 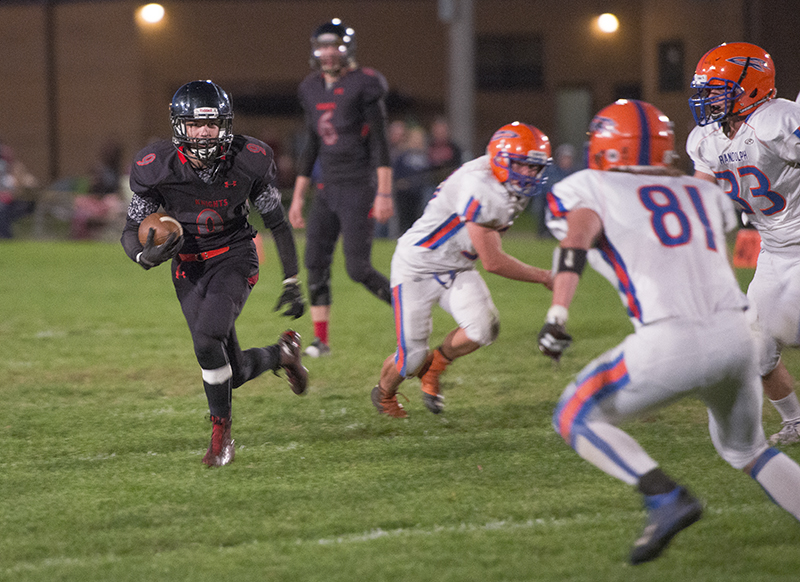 GLENVILLE — The Alden-Conger/Glenville-Emmons Knights have enjoyed a fairly successful season in 2016, so far. The Knights were looking to get to back to the .500 mark with a win over Randolph Friday night. The Knights didn’t make it easy on themselves, especially in the fourth quarter, but ultimately they came away with a 36-33 win.

“We tried giving it away in the fourth quarter,” said Knights coach Chad Mattson. “But in the end, a win is a win. We came out flat, but got things together in the second quarter.”

The Knights found themselves down 13-0 in the second quarter, but then quarterback Derek Van Ryswyk found his favorite target, Carter Dahlum for a touchdown.

Up 14-13, Van Ryswyk found Dillan Lein for another touchdown, then Seth Chapek ran one in and it looked like the Knights were going to cruise to the victory. But Randolph battled back to make things interesting. However, AC-GE’s defense stepped up and made some plays when it needed to the most.

“I got to give a lot of credit to our defensive line,” Mattson said. “They brought pressure all night and created chaos.”

The defensive line was responsible for five sacks and the Knights forced four turnovers.

Seth Chapek led the Knights on the ground with 84 yards and a touchdown. Luke Morrison also scored for the Knights.

The Knights are now 3-3 on the season.