Lake Mills runs out of steam against South Winn. 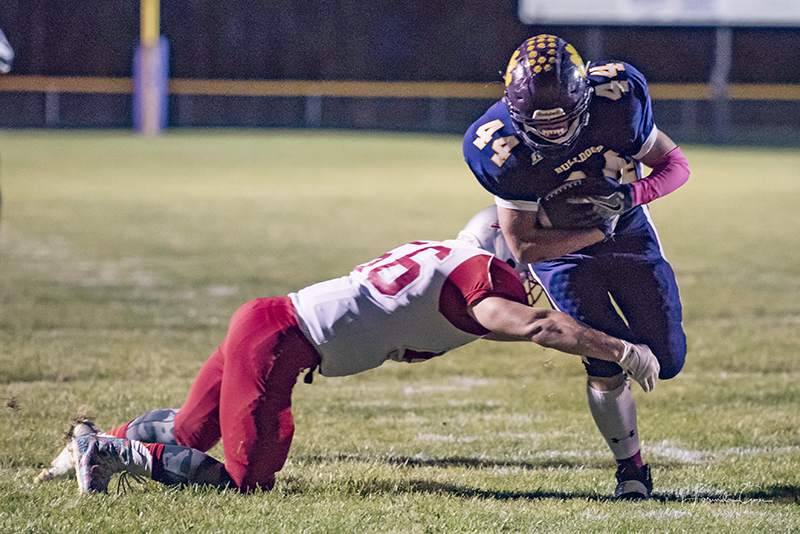 Lake Mills running back Marcus Escherich runs through a tackle by South Winnesheik’s Noah Kuboushek during Friday’s game. Escherich led the Bulldogs with 63 rushing yards and scored his team’s only touchdown in the 24-10 loss. Lory Groe/For The Albert Lea Tribune

The Lake Mills Bulldogs were looking for another victory to add to its total Friday. South Winnesheik was the opponent, and proved to be a tough one.

Lake Mills jumped out to an early lead, but it wouldn’t last long. South Winnesheik came roaring back and scored six points each quarter to win the game 24-10.

“We played great football in the first half,” said Bulldogs coach Bill Byrnes. “We played with great energy and turned the opening turnover into points. We found ourselves down 12-10 at half, but we were right in the game.”

The Bulldogs couldn’t generate offensive yards into points in the second half, and South Winnesheik got two short-yardage touchdown runs from its running backs to put the Bulldogs away.

Marcus Escherich led the Bulldogs with 63 rushing yards and scored the only touchdown of the game for Lake Mills.

“This game came down to who made the least amount of mistakes,” Byrnes said. “Our effort was the best we’ve had all year.”