Memorial services will be at 11 a.m. Saturday at First Lutheran Church in St. Peter. Visitation will be from 4 to 7 p.m. Friday as well as one hour prior to the service at the church. Memorials are preferred to the Benedictine Living community, Care Providers of Minnesota or Mayo Hospice. St. Peter Funeral Home is assisting the family. 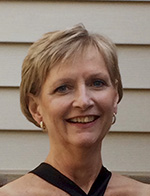 Linda was born March 20, 1957, in Albert Lea, the daughter of Kermit O. and Marie (Bowman) Gilbertson. She grew up in the Albert Lea area and was a 1975 graduate of Albert Lea High School. In 1979, she graduated from Mankato State University with a degree in community health. On June 30, 1979, she married her high school sweetheart, Thomas Nelsen.

They made their home in St. Peter.  Linda received her long term care administration license from the University of Minnesota while working at Grandview. From 1982 to 1986 she was the administrator at Grandview, from 1986 to 1993 she was district manager for Good Neighbor, from 1993 to 1997 she was regional director of Operation for Good Samaritan, from 1997 to 1999 at home office in St. Peter for Alternative Living Service as regional director of operations and oversaw the building of many alternative living centers, from 1999 to 2008 she was senior vice president of housing and assisted living for Pathway, and in 2008 joined the team at the Benedictine Living community in St. Peter. She was instrumental in planning the attached senior living facility of Benedictine Court, which opened in 2011, and she continued to work until her passing. Throughout her career, Linda’s focus caring for the elderly.

In the St. Peter community, she has served on First Lutheran Church Council and received the Theodore Larson Award for distinguished service in Christian education, acted as chair of the Friends of the Library for two terms, was chair of the public affairs committee for the St. Peter area Chamber of Commerce, and active member of the Lions Club and recently received an award from Women Celebrating Women. Outside of the community she worked as a member of the long term care organization, Care Providers, in the capacity of chairwoman of the scholarship foundation and was a recipient of the 2016 Chairman’s Choice award. She enjoyed traveling, reading and going up north, but her family was most important to her. She was highly involved and supportive of her children’s activities.

She was preceded in death by her parents; sister, Sandra; father-in-law, Howard Nelsen; and sisters-in-law Patty Nelsen and Carol Vick.