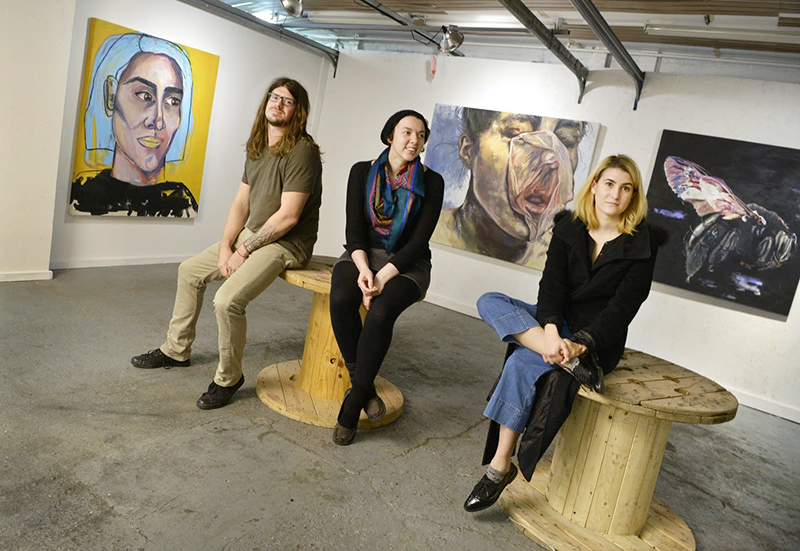 Ochre Creative Studios is an artist cooperative occupying part of a building on the edge of downtown Fargo. Local artists are concerned about the rising rental rates in the city's downtown core. Left to right are members Tyler Gefroh, Beata Weber, Andrea Qual. - Dan Koeck for MPR News

Tyler Gefroh faced a problem that’s familiar to many art students: When classes aren’t in session, there’s no longer a studio to work in.

What he found, Gefroh recalls, was “basically a three-stall garage.” While that’s still what it looks like on the outside, the inside has evolved into a full-fledged creative studio — complete with 5-foot-tall paintings on canvas and stacks and stacks of supplies — that houses seven artists and stages exhibits of their work.

At first, Gefroh and Qual just wanted other students to share the rent. Six others came into the fold. Then, last January, after some do-it-yourself construction and a lot of teamwork, Ochre Creative Studios was born.

“We didn’t really have a plan,” said Gefroh. “We basically wanted to have a show to introduce ourselves to the community, so we turned our garage into a little gallery.”

Their first exhibition, dubbed “Staring Contest,” ran in March. All of the artists completed a painting of themselves, staring at the other portraits. Over 100 people attended the showing, and Ochre has had several other features since then, Gefroh said.

What had started as some extra workspace became a first step into the real world of art.

“As students we normally don’t really get to have a show until our senior year,” Gefroh said. “As artists I think it’s important to know how it operates. How exhibitions work, how to submit your work, how you hang your work and deal with gallery owners and all that.”

“There’s a great, ‘I’m just going to make the work I want to make’ mentality there, because they haven’t really been beaten down by having to sell work,” Del Val said.

Not that they aren’t selling. Del Val said there is a growing market in the Fargo area for edgier work.

“When I left college 20 years ago, you just couldn’t stay here and be an artist because people didn’t even know what that meant,” Del Val said.

The studio hopes to put on a show at least every two months, with its next show featuring other students who haven’t yet been able to display their work anywhere outside university galleries.

Ochre’s artists hope to connect with others like them and build an atmosphere of collaboration, getting creators to work together regardless of medium, said Gefroh.

Ochre also hopes to educate the community on the value of that art.

“The thing about art is, people spend so much money on it every day,” said Ochre artist Beata Weber. “Movies, TV, even video games … but for some reason, when you bring it to a local level, people aren’t willing to value it in the same way.”

Ochre Creative Studios is completely self-funded. Gefroh said most of the artists have outside jobs, and they’ve all agreed that whenever a piece sells, 10 percent of the commission goes toward the daily operation of the studio.

That, on top of full college course loads, means these artists stay very busy. But helping fellow students and advocating for his craft make it all worth it, said Ben Neyers, another of Ochre’s artists.

“The biggest motivator for me, honestly, is proving to people that art is not just for people who don’t know what to do with their lives. It’s not a barista job,” he said. “I hope that soon people will see art again as just as important as science and math and technology.”

Both Gefroh and Neyers said they plan on keeping Ochre going throughout their university years and beyond.

“We’re working like a decently oiled machine, I would say,” Neyers said. “It’s not perfect, we’re still figuring it out, but I think we’re getting by.”