Pete was born, June 9, 1918, in Hanover County, Virginia, to Linwood Lee and Rose Howard Attkisson. He had three older brothers and a younger sister who preceded him in death. On Dec. 17, 1938, he married Marguerite Alice Barden and they enjoyed 62 years of marriage until her death in 2000. He was also preceded in death by a son, Ronald Lee; and a granddaughter, Sallie Ann Attkisson. 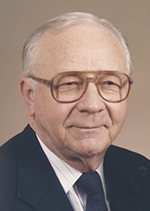 He retired from DuPont in 1978 with 40 years of service and was fortunate to enjoy 38 years of retirement while traveling, listening to country music, working in his shop and spending time with family and friends. He proudly served his country in World War II while stationed in Belgium and Germany. A gathering of family and friends will be one hour prior to ceremony. A funeral ceremony will be at 2 p.m. Wednesday at Bliley’s-Chippenham, 6900 Hull St. Road, Richmond, Virginia. Interment to follow in Dale Memorial Park in Chesterfield, Virginia.