The Albert Lea Police Department issued a statement Wednesday on its Facebook page reassuring area residents in light of what has been described as a social media hoax involving clowns. 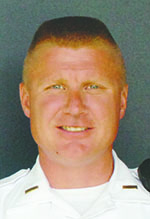 “The ALPD has determined that there are no credible clown-related threats in Albert Lea,” the post states.

At least one of the photos circulating was determined to be more than a year old and originated overseas.

“Please do not feed into the clown frenzy,” police stated.

Deputy Director of Police J.D. Carlson said police have not been concerned about issues that have been brought up thus far, but if people have concerns they can notify the Police Department.

According to Albert Lea police logs, a student posting threats on Facebook referencing clowns was reported at 10:28 a.m. Wednesday. Vandalism from spray paint was also reported under the Fountain Lake Park gazebo on the cement. The paint stated “We’re coming — clowns.” Damage was estimated at $40.

Albert Lea Area Schools also posted about the issue Wednesday on its Facebook page. It said it will continue to partner with the Police Department to ensure the safety of students and staff.

The posts come after creepy clown spottings have been reported all over the state and country.

In the Twin Cities, a 15-year-old girl was arrested after going on Facebook as Kroacky Klown posting a violent threat to residents. The threats spread to Bloomington, Richfield, Minneapolis, Brooklyn Park, St. Paul, Rochester, Apple Valley, Plymouth and Hopkins. According to the Minneapolis Star Tribune, charges will be pursued for the threats.

In Mason City, an employee of a Southbridge Mall store said she spotted a person dressed as a clown acting “creepily” outside her store, according to the Mason City Globe Gazette. A security officer reportedly chased the clown away, and police couldn’t find the alleged clown.