Robert (Bob) passed away Friday, Oct. 21, 2016, at Oak Park Place in Albert Lea, where he had resided for the past two and a half years. 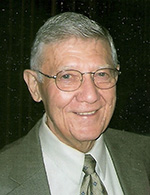 Bob was born Sept. 4,1925, to Edmund and Elizabeth (Meier) Hartman in Marshalltown, Iowa. He graduated from Marshalltown High School and later Marshalltown Community College.  When he was 18-years-old, he enlisted in the United States Marine Corps, where he served in the South Pacific during World War II. When he returned from the service, he enrolled at Marshalltown Community College, where he met his future wife. On March 31,1951, he was united in marriage to Pauline Handorf at Trinity Lutheran Church in Dillion, Iowa. Bob and Pauline had two children. In his early years, he worked as a bartender at the Tremont Bar and Billiards in Marshalltown, and eventually owned and operated the Elbo Room in Marshalltown for approximately 40 years.

Bob was an active member of Redeemer Lutheran Church in Marshalltown, where he served as an elder for a number of years.  He was a man of deep faith rarely missing a Sunday service even when out of town. He was a true gentleman, demonstrating by example his respect for his country, God and all people.

Bob was proud of his military experience and was a member of the American Legion. He faithfully flew the flag outside of his home throughout the years. Bob was an avid coin collector. Bob also loved to sing. He accompanied his wife, Pauline, on many YWCA bus trips and often led the group in song. During his stay at Oak Park Place in Albert Lea others would often hear him singing to his fellow residents.

Bob loved his wife, family and friends deeply. He was always present to share a laugh, play a game and attend a grandchild’s concert or sporting event. He loved the Cubs and took each of his grandchildren many times to see Cub’s games in Chicago.

Memorials are preferred to Redeemer Lutheran Church in Marshalltown.