Ruth C. Staehling, formerly of Northwood, passed away Tuesday, Oct. 18, 2016, at Heritage Manor Nursing Home in Streator, Illinois. She was 96.

A funeral service for Ruth will be at 2 p.m. Saturday at First Lutheran Church, 309 N. Ninth St. in Northwood. The Rev. Judy Converse will officiate. Burial will be in Sunset Rest Cemetery in Northwood. Visitation will be one hour prior to the service at the church. 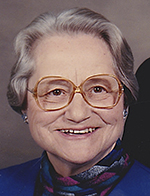 Those wishing to give a memorial in her memory may direct them to the charity of the donor’s choice. Conner Colonial Chapel is in charge of the arrangements.

Ruth was preceded in death by her parents; husband; four brothers, Arnold, Martin, Herbert and Rudolph Studier; her sister, Esther Staehling; her son, David Staehling; and a great-granddaughter.

Pallbearers and honorary pallbearers will be her grandchildren and their spouses.