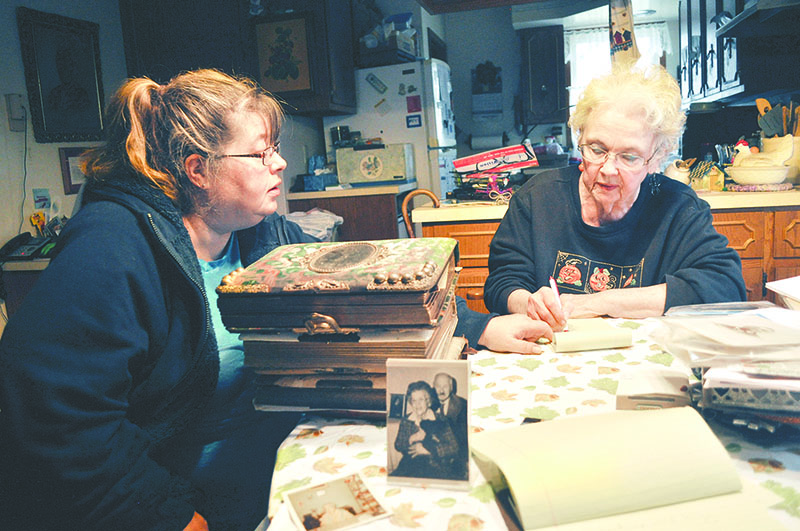 Anne Jelinek, left, searches for a photograph of one of her ancestors who, as it turned out, did not seem to want to be found. “He was a grumpy old gus,” said Anne’s mom, Polly, right. - Deb Nicklay/Albert Lea Tribune

AUSTIN — Anne Jelinek recalled an incident years ago, when she was having a casual conversation with her late grandmother, Irene Madison, as they stood in their Austin home.

Irene was in the dining room, while Anne stood near the doorway that accessed the area from the living room.

“And all of a sudden, something booted me right through the door — and I mean, booted,” she emphasized. “I told Gram, ‘I don’t know who that was, but that hurt.’”

“Oh, that was probably Uncle Sim,” suggested her mom, Polly Jelinek, as they sat at Polly’s kitchen table last week, chatting conversationally about things like spirits, shadowy figures and things that went bump in the night at their family home.

Although Anne got “booted” many years ago, the memories of strange occurrences in the home continue to be the stuff of conversations at family gatherings.

But if you feel they’re scary stories, well, they might be to you and me.

To the Jelinek clan, said Anne, “It seemed so normal because we always had things happening there.” 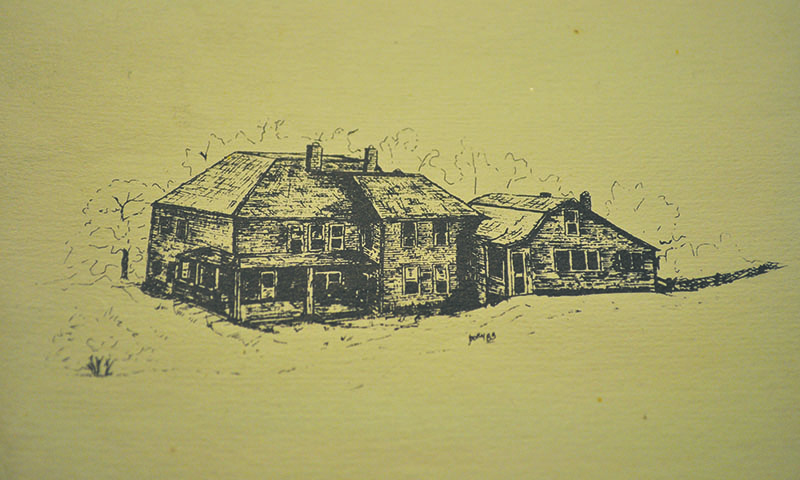 Polly Jelinek created this sketch of her family’s apartment building home — created from three buildings — that was home to five generations of her family. It was located on River Street, near the Roosevelt Bridge. -Provided

“There” was an apartment complex on Fourth Street Southeast — called River Street in its early years — fashioned from three old buildings that had served different purposes over the family’s six-generation history. One part had been an ancestor’s grocery store; another was part of a boat livery operated by Polly Jelinek’s great-uncles. The back of the structure, just northeast of the Roosevelt Bridge, opened to a view of the Cedar River.

Eventually, the structures were cobbled together and divided into separate living quarters, with different family members all living under one roof. Polly grew up in the apartments and so did Anne. Polly’s mother Irene and her husband, Edwin Madison, also lived there.

The complex seemed to be something of a lightning rod for paranormal activity or, at the very least, a place where sensitivities to such things were heightened. Polly recalled there was a dark basement into which she seldom wandered. She said there was a door, painted black, that was the doorway to a tunnel that stretched toward the river and bridge. Polly has no idea why the tunnel was there and she never entered it. The linking together of the structures resulted in “rooms being in weird places,” said Anne, which also lent some strangeness to the spaces.

The structure was torn down some years ago. Today, only a small green space marks where it once stood.

Polly did not experience many of the happenings that Anne — and probably her mother — did, and she has no doubt Anne inherited some of Irene’s sensitivity to things unseen.

“My mother could tell the future,” said Polly, paging through her photo albums with Anne. “She could read tea leaves, or do it with a deck of regular playing cards.”

“People came from all over the neighborhood to ask Gram help them find something they lost,” Anne added.  “She went to a fortune teller once and the woman told her, ‘I can’t read you … you know more than I do.’”

Anne recalled an incident when she was a young teenager. She had invited a friend to spend the night and, while they were playing in her living room, Anne looked up to see the figure of a bearded young man wearing a white robe passing by a door. Then the image passed through an area in the wall “where there had once been another door but that had been blocked off,” Anne said.

When she told her grandmother what she had seen, Irene said, nonplussed, “Oh, that was just Ghostie,” a catch-all moniker Irene used for any spirit that came their way.

And lots of spirits seem to come their way.

Anne said things might go missing only to show up later in the exact spot they were looked for initially; she recalled hearing the door to an empty closet open by unseen forces despite the fact the door was blocked shut by a heavy chaise lounge.

One of the more chilling incidents happened when Anne and a friend were “playing with one of those old crank phones — it wasn’t connected to anything — and we were pretending to talk into it. When we put the receiver to our ear, we could hearing someone talking.”

In another incident, Anne was at her bedroom window, watching friends move items from an apartment.

Anne yelled to her girlfriend, asking “who the cute guy was” that had helped them move the items.

Her friend gave her a quizzical look, saying only she and her boyfriend were moving things.

The boyfriend then asked Anne what the person looked like.

After she described him, the boyfriend said, “It sure sounded like his best friend, but that he’d been dead for two years,” Anne said.

Anne even fought with spirits on occasion.

“I was sitting in a room, a room that I was told I could use just to hang out in, you know, with my stereo, my records,” Anne recalled. “And I can remember getting more and more irritated. Finally, I went to my grandmother and said, “‘Gram, make him leave me alone,’ ” she said.

When her grandmother asked who she was talking about, Anne responded, “The guy in my room; he keeps telling me to get out and that it’s his room. Tell him it’s my room now.” Irene called to the spirit to leave and Anne was left alone.

There were times when the activity seemed to be more characteristic of a great uncle, named Simeon — “Uncle Sim” who operated the boat livery.

“He was a grumpy old Gus,” said Anne, who thinks it was his boot that boosted her through the dining room door.

Polly did not really experience events in the way Anne did, but as this interview wore on, Anne mentioned Polly’s own ability to find things for people.

Polly admitted that “I get an image in my head” that might not be the exact missing item, but a symbol of some type that points to where the item might be. Anne has also shown some ability to locate items.

The sensitivity seems to have spanned generations.

“If we smell roses, we know my great-grandma Lily is around,” Anne said. “She always wore perfume that smelled like roses.”

Polly also said at least one family story was humorous. This one had nothing to do with the hauntings on River Street.

Her father was a young boy when, knowing he was late for supper, ran through Oakwood Cemetery in Austin as a shortcut to his house. He did not want to be late and made his way through the dark, working his way around the graves.

Suddenly, “he saw something white, in the distance, running toward him. He thought he was seeing a ghost,” Polly said. He ran harder and made it home without incident.

The next morning, a neighbor came over to their home, telling them his horse — his white horse — had run from his property the night before.

“And the funniest thing was, he told us, that he’d found his horse standing in the cemetery,” Polly said with a laugh. “So much for ghosts.”