A memorial service for Darryl “Tiny” Juveland will be at 3 p.m. Saturday at First Lutheran Church in Albert Lea. The Rev. John Holt will officiate. Visitation will be from 4 to 7 p.m. Friday at Bonnerup Funeral Service in Albert Lea and again one hour prior to the service at the church. Interment will take place at Graceland Cemetery.

Darryl Kermit Juveland was born Sept. 30, 1944, in Albert Lea to Kermit and Darlene (Seath) Juveland. He grew up on a farm, and had farming in his blood ever since. 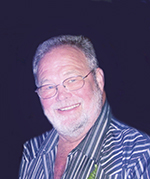 Darryl worked in the Hollandale area all of his life. As a young man, he started out at Paul D. Jones, and then worked for the Edwards family for 42 years as a farmer — although he never called it a job, because he truly did love to farm. He took great pride in planting and harvesting the crops. He also drove truck for Land O’ Lakes for 10 years, but never missed planting and harvesting while trucking.

Darryl was a proud member of the Ulstad AA Club, where he was sober for over 34 years. In his free time, he enjoyed motorcycling, road trips with his friends where they would often check the crops and shoot the breeze, and meeting his group of friends for breakfast at B&B Café and Hy-Vee. Together, Darryl and Paula enjoyed playing cards with various card clubs throughout the years. Darryl would also play cards with his AA family every Wednesday night for the past 40 years. Most of all, Darryl enjoyed time spent with his family and friends — especially all of his grandchildren.

He is preceded in death by his parents Kermit and Darlene; as well as his brother, Duane.