Dorothy Alvina (Weckwerth) Hagen was born May 8, 1925, on the family farm near New Richland. She attended country schools and graduated from New Richland High School in 1943.  She was baptized, confirmed and married at St. Peter’s Lutheran Church in New Richland. 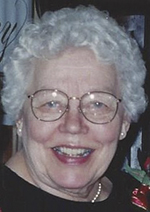 She moved to Lutheran Motherhouse in Milwaukee to become a Lutheran deaconess. Her first assignment was to the Lutheran Orphans’ Home in Toledo, Ohio, where she was the house mother for girls.

During this time, she met Frederick Hagen. Fred was raised in the orphanage, served in the Navy during World War II and returned to the home to be a maintenance man and big boys supervisor. They fell in love and she gave up her commitment as a deaconess. They married on May 24, 1950, and moved to Williston, Ohio, from 1950 to 1955, where they both worked at the Luther Home of Mercy. They moved to Clarks Grove from 1955 to 1960 until Fred decided to go into the ministry as a second career and they moved to Dubuque, Iowa, from 1960 to 1964 to attend Wartburg Seminary. Their first call was to the Norway Lake Lutheran churches — First and East — in rural New London, from 1964 to 1967.

She is survived by her four children, Marie of Northfield, Daniel and Shari of Northfield, John of Apple Valley and Paul and Jill of Amherst, New York; her eight grandchildren and four great-grandchildren, Keith and Summer (Tommy), Rebekka and Andrew Zaffke (Hagen, Henry and Zella), Kevin and Rachel, Bethany, Daniel and Julie, Jacob, Isaac and Hannah; her sisters Theresa Hanson and Leone Ide-Svelmoe; her brother-in-law, Stan Miller; and cousin, Eunice Amos. She is also survived by many nieces and nephews, and by many loving friends.

She was preceded in death by Fred, her husband of 62 years; her parents Daniel and Amelia (Moldenhauer) Weckwerth; her brother, Bernard, and sister-in-law, Mabel Weckwerth; sister, Lois Miller; brothers-in-law Arnold Hanson, David Ide and James Svelmoe; and by two foster sons, Mikey and Joey.

Funeral services will be at 11 a.m. Nov. 11 in the chapel of Northfield Retirement Community. Interment will be that afternoon at Hillcrest Cemetery in Albert Lea. Her eight grandchildren will be the pallbearers. Visitation will be from 4 to 7 p.m. Nov. 10 at Benson & Langehough Funeral Home. Visitation will continue one hour prior to the service at the chapel.

Memorials are preferred to the Lutheran Orphans’ and Old Folks’ Home Society, now Genacross Lutheran Services in Toledo; the Luther Home of Mercy in Williston, Ohio; or St. James Lutheran Church in Burnsville.