Embark on an Advent adventure 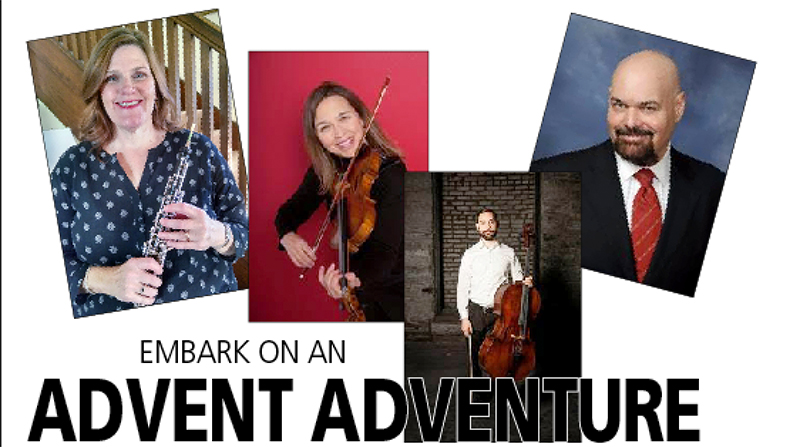 For many Christians, faith is a journey of twisting paths and bumpy times, with grace and God smoothing the way forward.

During Advent — a time of celebration of Jesus Christ’s birth and preparing for his second coming —First Lutheran Church offers a destination for all to reflect and renew their spirits, as well as feel joy and hope.

The Albert Lea church is holding an Advent Adventure each week this season with time to pray, break bread together and meditate to music.

Each adventure includes devotions and prayers at 11 a.m. followed by lunches at 11:30 a.m., both in Bethany Hall on the lower level of the church. Recitals are in the sanctuary at 12:30 p.m. When the recitals end at 1:15 p.m., participants are welcome to stroll the Crèche Walk, a display of 100-plus nativity sets.

There is no charge for the prayer services and recitals, but lunches are $6 per person. Lunch will include a hearty homemade soup and fresh sandwich or a hot dish and side, topped off by dessert. Reservations for lunch are required, and can be made by calling the church office at 507-373-6424 by noon each Monday preceding the Wednesday services. Large groups, such as service clubs and church buses, are welcome.

Guide and workbooks for devotions are available at the church office.

The first stop on the adventure will be Wednesday with a focus on “The coming of Jesus Christ — faith revealed” and an oboe recital by Holly Dalager of Austin. She holds a master’s degree in music and a bachelor’s degree in music performance from the University of Minnesota. Before moving to Austin in 1992, Dalager performed with many orchestras, theaters and ballets in the Twin Cities. She is now the principal oboe with Austin Symphony Orchestra. Dalager also offers private lessons in piano, oboe and flute; directs a youth choir at Our Savior’s Lutheran Church and directs a band program at Pacelli Catholic School.

The second stop will be Dec. 7 with a focus on “The coming of Jesus Christ — hope for the ages” and a recital by Ovation String Duo, including violinist Laurie Melting and cellist Greg Byers. Melting holds a master’s in violin performance from DePaul University and a bachelor’s in music education from Northwestern University. She performs with several groups in the Twin Cities, and has studied jazz and blues in addition to classical music. Byers holds a master’s in performance from McNally Smith College of Music, a master’s of performance and composition from California Institute of the Arts, and a bachelor’s in instrumental performance and studio music and jazz from the University of Miami. He performs with several groups in the Twin Cities, where he is also a teacher, composer and arranger. Byers plays bass in addition to cello.

The final Advent stop will be Dec. 14 with a focus on “The coming of Jesus Christ — love unending,” with a piano and vocal recital by Tim O’Shields, minister of music and worship at First Lutheran Church. He holds degrees from Furman University and University of South Carolina, and will study for his Master of Divinity at Luther Seminary starting in January. He directs the First Lutheran Church choir, Spirit Express singers and band, choral scholars, handbell choir, two children’s choirs, Albert Lea Brass, Gethsemane Contemporary Singers, music and arts camp, Word Alive drama team, Women and Men of First Singers and Resurrection Choir.